Sounds coming from your attic could be from a number of causes (pipes, settling, wind), but the most common cause is the presence of an animal (or animals) in the attic. Critters just love to live in the attics of homes, and the walls, ceiling gaps, crawl spaces, etc. But attics are the favorite spot for wild animals. It's usually not to hard to tell if the sound is coming from a living thing, as opposed to mere house noises. An animal moves around, it scratches at random, it thumps, scurries, and pitter-patters around. It's very common to have animals break into the attic of a house. Luckily, you can definitely solve the problem, so fear not!

Sound is usually the first clue people receive regarding a critter problem. Sure, the animals might cause odor issues, they might cause damage that you notice (such as a chewed and now faulty duct or wire), or you might even see the animal crawling up your house, onto your roof, and into the attic, but most of the time, it's the noises that people notice first - that's when they know they have an animal invasion. It is most definitely best to address the problem. If left unchecked, most animals in attics cause damage, sometimes significant, and can pose some serious potential health risks. And once they find a nice attic to live in, they stay there a long time - they don't just move out for no reason. They must be properly removed.

I'm going to analyze the various types of sounds you might hear above your head, so that you can get a clue as to which type of animal is living inside your attic space: 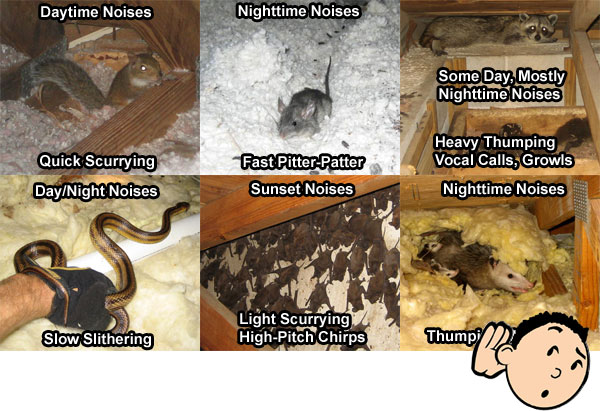 Daytime Noises: This is the easiest - one of the most common animals that lives in attics, and walls, eaves, soffits, ceilings, is the Eastern Gray Squirrel. It is active during the daytime, particularly early morning and early evening before sunset, so if you hear noises at those times, particularly fast, scurrying noises running about, then it's almost surely squirrels. No need to read any further! But wait - sometimes raccoons can make noises during the day too - they don't necessarily sleep all day. But raccoons also make night noises, and they are heavier and slower.

Vocal Noises: If you hear vocal growls, calls, or a sort of chattering, it's almost certainly raccoons. The other animals are silent. Bats make a very high-pitched chirp, but it's unlikely you'd ever hear it. But raccoons, especially baby raccoons, make a lot of vocal racket. So if you hear that, it's raccoons.

Fast Pitter-Patter at Night: Most likely rats or mice. They can be surprisingly loud, depending on house acoustics. You'd be surprised. They can sometimes scratch, but if you hear fast running, particularly if it goes up and down walls, then you've got rats or mice! A mouse is pretty small, so the sound will match - in timbre if not volume.

Thumping at Night: This one is a little more vague, but of course thumping usually comes from larger animals, so it's most likely from raccoons or opossums.

How do you solve the problem of the noises in the attic at night? Once you've identified the animals, you've got to remove them. This can be accomplished via either trapping or exclusion techniques, such as one-way doors that let animals get out, but not back in. Many people have asked me about repellents, from mothballs to coyote urine to ultrasonic sound machines, and I do know that many of them are sold, and in my many years in the field, I have tested several of them, and gotten MANY reports from homeowners who have tried them out, and these products FAIL. They are bogus, they are a waste of time and money. They are gimmicks so that someone has something to sell. Go ahead and try them out if you want - meanwhile, the animals in the attic will just keep causing damage. Only real, physical removal of the animals will take care of the problem. This process varies a great deal by animal, time of year, architecture, and so on. I've written many wildlife trapping guides on this site, but the bottom line with animals in the attic is that you're best off, for your property's sake and for safety and even legal reasons, to hire a professional wildlife removal company.

Article topics: Nocturnal animals scratching and clawing loudly in the ceiling in the middle of the night, hearing noises in the attic at night, noise coming from the attic or ceiling, hearing sounds at night in the attic, nocturnal sounds from animals in the attic, crawlspace, walls, or ceiling at nighttime, banging and thumping noise above my head in the attic. You can also read about Knocking Sound In Attic.