Need wildlife removal in your hometown? We service over 500 USA locations! Click here to hire us in your town and check prices - updated for year 2020.

One way doors are a great way to get squirrels or other wildlife out of a home or building. Please be aware that this technique won't necessarily solve your squirrel problem - new squirrels will quickly move in to replace the old ones. If there's squirrels in the attic, there is probably a nest of baby squirrels up there. If squirrels are chewing, excluding them won't stop new ones from doing the same. The situation is often more complex than simply setting one-way doors. And to be honest, this technique is not necessarily easy for beginners.

One-way doors are mounted directly on a building, right over a hole squirrels are using to enter and exit a house. The device should have flanges, or wings on one end, to mount the trap to the building, and a torsion-spring repeating one-way door leading into the cage. This type of setup is the best way to remove the target squirrels, instead of traps, which can catch non-target, or incidental animals. 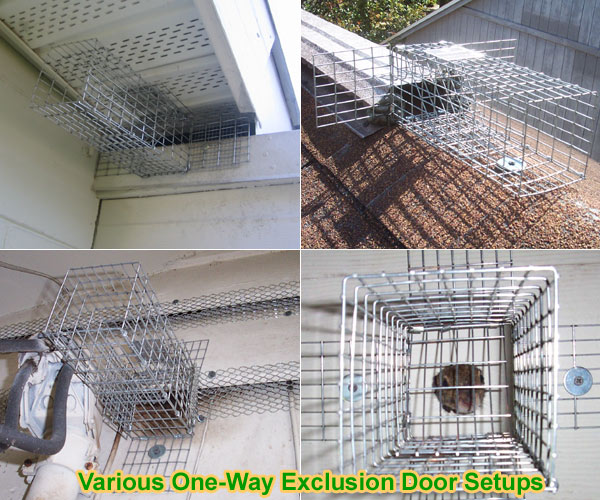 Here are some photos of various one-way door setups. First, find the hole that the squirrels are using to get into and out of the house. If there are several holes, seal up all but one hole, preferably the most popular one. All seal-ups should be done with steel screening, the kind that squirrels can't chew through. And remember, squirrels are great chewers! The one-way door is a great option for simply getting all of the squirrels out of a house, and not letting them back in. Don't use this trap if there are areas that squirrels can use to chew their way back in - only use it on secure homes with well-defined entry/exit holes like the ones pictured above.

You can also use a funnel. I've made the one you see above. The squirrel in this photo is actually in the midst of slipping out of this thing like butter. It seriously just slinked out in like a tenth af a second at lightning speed. I had one chance at a photograph, and wish I'd caught it a nanosecond later, with most of the body out. Funnels like these must be extremely precise to let the animals get out, but not get back in. Too big a hole, and they can re-enter. Too small, and they won't be able to get out.

Click here for my full guide on how to get squirrels out of the attic for advanced tips and advice, or my original squirrel removal page with various basic information.

A Guide to Using One-Way Funnels for Squirrels

One-way funnels are pretty much name as the name would suggest — a funnel-shaped object that allows just one-way movement; hopefully, the wild animal invader right out of your life.

One-way funnels or exclusion devices (as they are also known) are actually very effective at evicting wild animals from both commercial and residential properties, allowing the creatures to find their home without you getting involved too much. When you trap a squirrel in a cage, you then have the responsibility of finding a new home for it, and relocated critters don't usually live for very long once they have been released back into the wild.

With an exclusion-style device, you are showing the squirrel the door, but you're not literally throwing them out. It’s the humane way to evict animals, and when these devices are used in the correct fashion, they can actually be very effective.

There are a few occasions when using exclusion devices or one-way funnels might not work for squirrels, such as when you have more than one squirrel. If your invader is female and has recently had young squirrels (checker the underbelly for signs of enlarged nipples ... without getting too close), exclusion devices won't work well. You can evict the mother, but her children will still be stuck inside the building. Without their mother, those children will likely die.

If you are use that you only have the one squirrel living in your building, the one-way funnel trick is going to be a great one for you. Funnels made out of wire (which is a common DIY method found online) need to be exact and precise to ensure they do the job without hurting the animal. The method is simple — you create a funnel with the wire so that it is tube-shaped, but thinner at one end than it is on the other. That funnel will be inserted into one of the holes that the squirrel uses to gain access into your building.

The edges of the wire should face inwards, but only a little. The squirrel can get out of the thinner end (the end that is in your building), but the inward-facing wire edges prevent the creature from backing up or getting back in. The outer end of the funnel — the one that leads the animal out of your home — is wider, therefore, allowing the squirrel to scamper off with ease.

If you get these measurements wrong, you run the risk of the squirrel seriously injuring itself trying to get back in again, especially when you're dealing with sharp wire spikes. Also, if you have a female squirrel trying to get back into the building to tend to her children, she’s not going to worry too much about the physical pain she’ll endure in the process. For many wild animals, keeping their kids alive and healthy is the most vital part of life. She’s certainly not going to abandon them where they are without a fight.

If you aren’t sure about using one-way funnels to exclude squirrels from your property, you can actually buy exclusion trap devices online and in some good hardware stores. These are built very similarly to live cage traps, long and rectangular, but they have one end that is left open. The door shuts on the opposite end, once the animal has clambered through, and they are then locked out. They can leave the open end of the trap, but they can't get back into the building once the door has slammed shut.

Go back to the Squirrel Removal page, or learn tips to do it yourself with my How to Get Rid of Squirrels guide.