Need bat removal in your hometown? We service over 500 USA locations! Click here to hire us in your town and check prices - updated for year 2021. 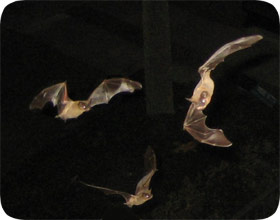 Bats are usually classified as a pest species due to their habits of living in houses. The most common complaints include the following:

For these reasons, many people wish to have colonies of bats removed from the building. Please be aware that this is a specialty service.


Since it's a very common problem, I have here an advice article with photos on how to get bats out of the attic. If you just have a single bat (or two) flying around inside your house and you need to get it outside safely, read my bat in the house page. I have also written a page about how to get rid of bats in the chimney. Below is a short guide about getting bats out of buildings. Please read the advice and click on the supplemental information. In the end, I have to be very honest with you - it's not easy work, especially for beginners. I myself did several dozen bat jobs, and made many big mistakes, before I got good at it. If you need bat removal, for the sake of your health, property, and even for the sake of the bats, please consider hiring a professional. My list is probably the best resource of bat control experts in the country, because I've researched it myself.

Bat Removal - How To Get Bats Out of Buildings

Step 1: Perform a full inspection of the building. This is to determine exactly how the bats are getting in and out. Click here to read more about how to do a bat inspection.

Step 2: Perform an attic inspection, and learn to identify the species of bat. This is important because different bats have different birthing and hibernating seasons. Read more here on my colonizing bat species page.

Step 3: Exclude the bats - DO NOT ATTEMPT TO TRAP THEM. Read here why you should not try to do bat trapping, but rather bat exclusion, which is the process of letting them fly out, but not back in, to the building.

Step 4: Seal up the house to keep bats out permanently. In fact, much of this is done prior to the exclusion - just be sure not to seal up the primary exit points while any bats are inside!! Read more about how to seal up the building properly on my bat prevention page.

Step 5: Clean the attic or walls, or space where the bats lived and defecated. Read more on my how to clean bat guano page.

A while back, I made these instructions on how to get bats out of buildings for a friend starting his own wildlife removal business, and it'll also be helpful, with many good photos and instructions. 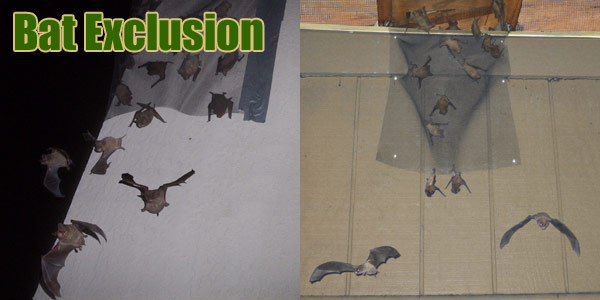 BAT BIOLOGY: North America is home to many species of bats, but these are the three most common nuisance (colonizing) species in the US: First is the Little Brown Bat (Myotis lucifugus) which is common in most of the US, especially the more northward states. These bats are small, with a wingspan of 8 inches, and a weight of less than half an ounce. The females form large maternity colonies, often in buildings such as attics or barns. Young are born in June, and can fly by August. They can live up to 30 years apparently, though average lifespan in the wild may be about 7 years. They hibernate in the winter. The Big Brown Bat (Eptesicus fuscus) is also common in the northern areas. It has a wingspan up to 13 inches, and can live up to 19 years in the wild. They mate in October, before winter hibernation, and after a delayed fertilization and a 60 day gestation, give birth to one or two baby bats in early June. The Mexican Free-Tail Bat Tadarida brasiliensis is common in the south. It has a wingspan of about 8 inches, a weight of half an ounce, and can live up to 16 years. These bats will form huge colonies, up to several million members in some cases. They mate in the fall, but delay fertilization, and one pup is born in early June, and can fly about eight weeks later. All of these bats often roost in man-made buildings, and love the attics of homes. None of these animals are actually blind, but they do use echolocation in order to aid in navigation on the wing. They are all insectivorous, catching insects on the wing. Read About Colonizing Bats species info.

BAT BEHAVIOR: Bats are nocturnal. They sleep in roosts during the daytime, and emerge at dusk. If it's a colony of bats living in a building, they crawl to the edge, and fly out. First they head for water and get a drink, skimming the surface on the wing. They then feast on flying insects, primarily moths and beetles. After a while they get full and head back to the roost in order to rest. They then fly back out to feed some more. They may make several trips per night. Bats use echolocation in order to aid in navigation and feeding on the wing. They emit high-pitched chirps and read the sonar-like returns of the sound waves as they bounce back off of objects. Roosting preference depends on the species and even gender of the bats, but we are only concerned with colonizing bats such as the three mentioned above. These colonies are composed primarily of females. The males roost alone in solitary areas, such as trees. The females form huge clusters, very frequently in man-made architecture such as church towers, attics, bridges, etc. They tolerate and even prefer very high temperatures. Many of the southern bats migrate to different areas as climates change. However, bats in the north hibernate in colder weather.

NUISANCE CONCERNS: The primary concern involves large colonies. If it's just a few bats, it may not be a big deal. However, if you've got a typical maternity colony of bats in your home or building or even barn, it can be a big problem. A large colony is not only noisy and unsettling at dusk and dawn as swarms of bats fly in and out, but the main problem is that they leave their droppings and urine behind. With a large colony of bats, this really adds up. After a while large piles of droppings form. Not only do the droppings and urine corrode wood/metal, but the weight of them can collapse the ceiling below the attic - I've seen if a few times. The waste has a foul odor, but it can also grow fungal spores that people can breathe in, leading to the lung disease Histoplasmosis. How Dangerous Are Bat Droppings?

BAT DISEASES: I've already discussed Histoplasmosis, a fungal infection of the lungs that results from the fungus that grows on nitrogen-rich bat droppings, but it's also important to keep in mind the fact that the majority of the cases of rabies transmission in the United States have come from bats. Read about How Many Bats Have Rabies? The higher rate of infection may be because people are less cautious around bats than say, rabid raccoons, or because bats are very small and can bite and infect people in their sleep. Or perhaps the particular strain of rabies that bats or certain species of bats carry is more likely to infect people. Regardless, if you see a sick bat on the ground, don't pick it up, because you might get bitten! Read about What If You Are Bitten By A Bat

HOW DO I GET RID OF BATS? Bat removal is not a simple task. There is no effective bat repellent for example that can do the job easily. The proper way to get rid of them is to exclude the colony - seal off 100% of possible secondary entry points on the home and remove all of the bats from the building safely. It is often very challenging, and it must be done just the right way. An amateur attempt, by someone with no experience, or worse, a pest control company that uses bat poison, could result in disaster - dead, rotting bats, and bats swarming throughout the walls and the home. How to get rid of bats in a building - read the above articles, which describe how to seal up all auxiliary entry points, install one-way exclusion removal devices on the primary bat entry and exit holes into the house or building, and even clean the mess afterward. Read Best Ways to Remove Bats from a Barrel Tile Roof.

CAN'T I JUST USE A REPELLENT? There is no registered or effective bat repellent available. Some companies will try to sell anything - there's a lot of so-called bat-repellent or bat-away products on the market, but they are bogus. And those high-pitch noisemakers? The FTC has issued a warning against them - ultrasonic sound emitters do not work. There is no quick and easy fix when it comes to bat control. It's best to have a professional with years of experience take care of the problem.

Bat Email From Reader: Hi David, I found your site to be very informative and interesting. I do, however, have one question that I didn't see addressed on your site; can/do bats live in walls? I am a Maine resident and I am without a doubt certain that I have something living in my walls. I'm pretty sure they are there year round, and a very strong odor has developed in the bedroom. I am aware that there are bats in my attic as I have seen them flying in there and each year I receive friendly visits inside my home on two or more occasions usually around July/August. I was led to believe that bats in Maine migrate south in the Fall; however, I have seen bats flying in my attic during the winter months as well. I'm concerned that the guests I have in my walls are not bats, but rather something of a larger size. Regardless of what is actually in the walls, is it possible to remove nests and droppings from walls without totally demolishing the home? I am considering requesting an estimate for removal from the one company that I am able to locate in the Augusta, Maine area from your link; however, how does one know if a company is experienced, effective and trustworthy such as yourself? I appreciate any guidance or suggestions you can offer. Thanks again for the great information and photo's you have provided on your site. Laurie

My Response: Bats do often live in walls. The fly into a gap, and will roost in very tight areas, including walls. A strong odor is a good indicator that the animals are bats. I do trust the company that I've listed in Maine to do the job well, and it never hurts to get an estimate, but in the end, I guess you've got to make your own decision on who to hire. Remember, don't hire anyone who would tell you how to kill a bat - bats are most effectively removed alive.