You have a bat problem in your house, and you want to get rid of the bats. It's reasonable to assume that a bat trap will do the trick. After all, we have rat traps and squirrel traps, and even pigeon traps that work well. So perhaps you'd like to buy a bat trap to catch and remove those pesky bats.

I have bad news and good news. The bad news is that there really aren't any effective bat traps for sale. The good news is that you can completely solve your bat problem, not through the use of traps, but by using one-way exclusion devices, such as netting or funnels. When Should You Use One-Way Exclusion Devices to Get Rid of Bats? 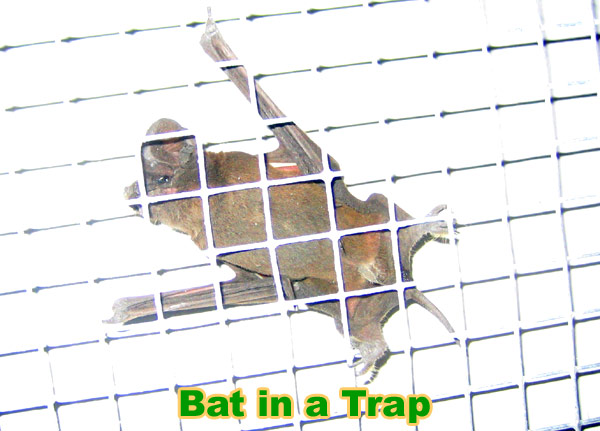 The above and below photos are actually shots I took of bats inside attics, crawling about behind steel exclusion mesh that I installed. The bats were going in and out of an attic via some large gaps, and in order to properly solve the problem, I blocked off several of the exit areas with the mesh, and installed a large amount of exclusion netting on many of the other openings. In order to get out, the bats had to crawl along the steel mesh, to the netting areas, and fly out. So I took these photos as the bats were crawling along or lined up behind the steel mesh areas. 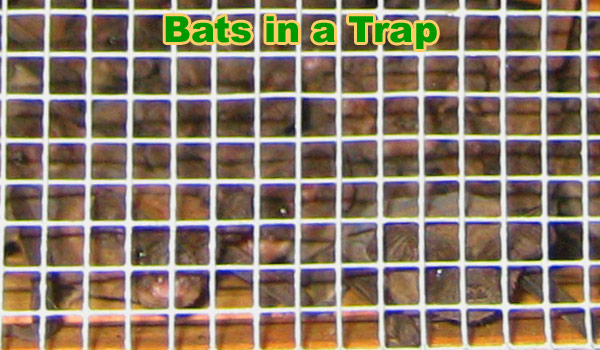 Eventually, all the bats crawled out, and left the attic. None were left behind. The important thing is that I didn't catch, or trap these bats. They were removed from the attic the proper way - by exclusion. They were allowed to crawl out at dusk, as they always do, in order to fly out to get water and insects for dinner. They flew out of one-way netting. When they tried to return to the building, they were blocked by the netting, and had to go elsewhere. None were trapped, killed, or harmed.

And if you did actually trap a bat in a trap, what then would you do with it? Hopefully let it go - but then if the plan is to let it go, why not just use exclusion. If you planned to trap and kill the bats, that is unlawful, unethical, and just plain not necessary. A good bat job, with a 100% guarantee of permanent success with no bats every getting into your house again - is definitely achievable by doing it the proper way.

I have written several detailed articles about how to solve a bat problem without bat traps:
How to get bats out of the attic
Remove bats flying inside the house
How to get bats out of the chimney
Bat exclusion tips and techniques
Bat trapping
How to catch a bat
What If You Are Bitten By A Bat
About Colonizing Bats
How to inspect your house for bat entry
Bat prevention methods
When Can You Move Bats in the Summer?
Bat Repellents
What Symptoms Will a Sick Bat Display?
How to get rid of bats out of the attic when you have a bat phobia
About Bat Bug Infestation
A Bat's Calendar
Noises Bats Make When They Are Living In Your House

The author, David, is a bat removal expert with over 500 successful bat control jobs under his belt. I want to stress the importance of proper bat removal, and the value of these animals to the ecosystem. I've witnessed dozens of failed do-it-yourself bat jobs over the years, and it is not pretty - dead bats, horrible odors, rabies vaccinations, and so on. Read What happens after wildlife control exterminators get rid of bats? Bat removal work is not easy - I trained for two years learning, and even then, it took many jobs and hands-on training before I was competent. I highly recommend that you consult my list of wildlife control companies on the home page, and hire a professional to come out and look at your bat problem. Get a few quotes if you must. Bat removal - Are the Pro's Really Best? And remember, do not perform any bat exclusions during the summer maternity months. For more general information and links, go to my main bat removal page.

Customer Bat Email: Hi I have two bats that come every night and sit under my patio over hang and eat their bugs and whatever. I am scared of them and hate to go out there at night. I have not heard any noises in my attic. Is this a normal habit for them just to come and feed? They attache themselves to the stucco on the wall. My house is only 6 years old. I have read that there is nothing I can buy to keep them away. Is that true? Is there some way I can trap and remove them? And if so, bathowfartorelocate.html - How Far Away Should I Relocate a Bat?
I live in Redding Ca Yvonne

My Response: Those are probably male bats - females tend to live in groups in caves or attics. It is true that there is nothing you can buy to keep them away, and you can't trap them. They won't hurt you. Just leave them be, and they'll move on soon.

Customer Bat Email: I have an 18000 SQ FT wood barn built in 1935 in Edgewood KY. I have had problems with Bats in the attic and getting into the living areas for the past 10 years. Although I have called many exterminators, the bats always return. Is this the type of project you will take on? If so, is the next step a detailed phone call or do you come out and look around and then give a bid? Michelle

My Response: That is the type of job that I solve PERMANENTLY, but I live in Florida. Barns can be a bit tricky. Bats in a Barn – What's the Best Way to Get Rid? Your best bet is to hire someone from my directory - yes, you can certainly do a phone call first, and have an inspection and bid - any reputable company should offer that.

Customer Bat Email: I have an old house in Barrington, NH. It has many, many bats in the attic. They have started to find their way into our house and now is the time to get them out. There is a bat house outside for them. I'd like to trap them and move them to the bat house. I bought the house from an older lady and she believes they have been there for a long time. I can see a giant pile of guano on my roof. Please contact me.