How to Get Bats Out of the Chimney

If you have bats in your chimney alone, and not in any other part of the house or attic, the situation is a little easier, because the bats are confined to one small area. Before I discuss bat removal tactics, there are two very important things to keep in mind!

MAKE SURE THE DAMPER IS SHUT - So that bats don't get into the house and start flying around once you do your bat exclusion.
DO NOT START A FIRE - You will have to open the damper to start a fire, and when you do, bats will get inside the house. If you start a fire, for some reason many bats crawl down and fly out the bottom rather than the top. Plus, many bats would die, and to kill bats is illegal and inhumane. Plus, bats can fit through very small areas, and you may find bats in the attic and walls if you start a fire. 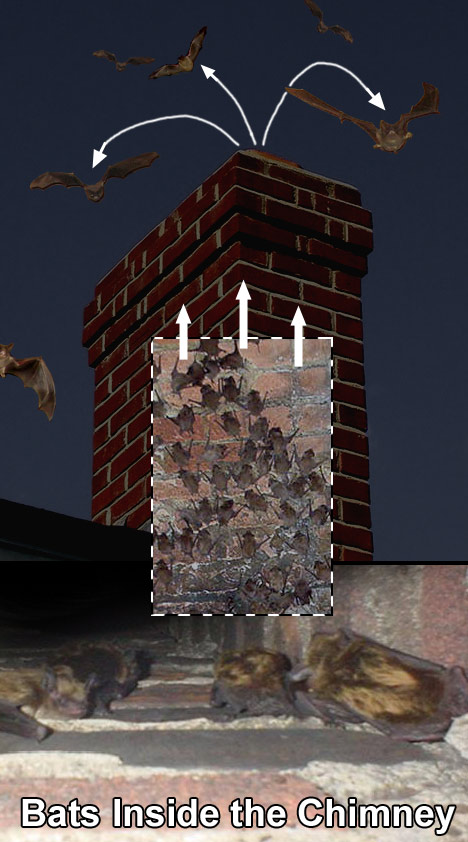 Bats in the chimney of a house.

The same principles apply for getting bats out of chimneys as for getting bats out of a house, or any other type of building or structure. You have to find the exit point, and properly install a one-way exclusion device over it. You can't, unfortunately, just let the bats fly out at night and then install a chimney cap. Not all of the bats go out at once. You need to install exclusion devices that let the bats fly out, but not back in.

Luckily, finding the exit point is easy - it's the big hole at the top of the chimney! Or is it? Many of the cases of bats in chimneys that I see are actually the result of bats going in through gaps at where the chimney meets roof, or in decayed and open areas. Bats don't always like to go through a big, vertical hole. They like small horizontal gaps best. So it pays to do a full bat inspection to find out exactly where they are going in and out. A night watch helps a great deal. Even if you know you've got bats crawling about and making noises in the chimney flu, you might observe the bats flying out of areas you didn't expect.

If they're coming out of the top of the flu, you need to pay special heed to leaving a gap above the exclusion netting, so that they can fly up, then around and out the bottom of the exclusion netting. It's pretty hard to set up properly. I honestly recommend hiring a professional bat removal company if you've got a colony living in your chimney.

Oh, and one other thing - of course, if you've got a colony of bats in the chimney, it's a maternity colony of female bats. They give birth to their pups in May, and the young bat pups are unable to fly until mid-August (timing varies a bit by species and part of the country) so PLEASE do not remove bats from the chimney during these summer months, known as the maternity season. Do it before, or wait until the young can fly in August. If you do an exclusion during the summer, the baby bats will be stuck inside, and I've seen so many problems with baby bats in the summer, it's crazy. Without their mother, they crawl all over the place, and get into the house.

Here's what to Do When You Have Bats in the Chimney

First things first; don't panic. Panicking is pointless, will just stress you and the animal out even further, and you won't get the job done. We know that NOT panicking is easier said than done when you have wild animal interlopers in your home, especially if you have a fear or phobia of the flying furry beasts, but the best way to approach this problem is with a rational head. 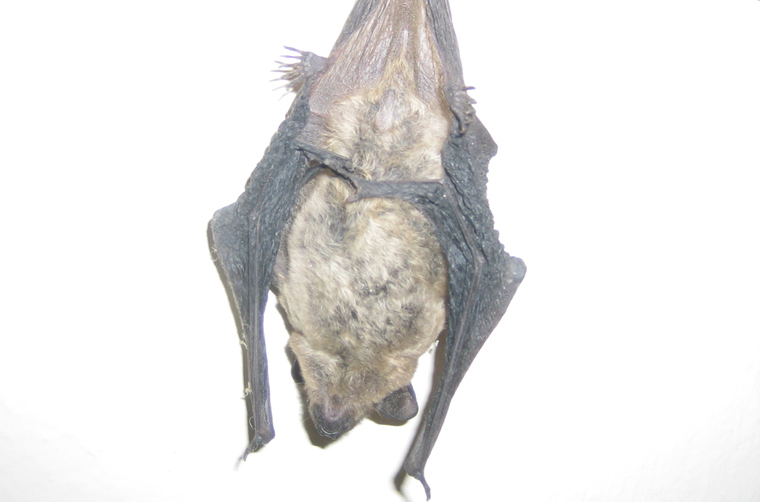 You have two ways of getting bats out of the chimney – through the top or through the bottom. That is, of course, unless you want to start knocking or cutting bits of wall down. Obviously, that's not the kind of approach that we recommend you take on a whim.

Step One: Find out how they got in.

A bat will need a size just 3/8 of an inch wide in order to get in, but they won't chew on materials to make holes bigger, unlike other nuisance wildlife. This does work in your favor a little, thankfully.

Areas that are common targeted include:

Upper areas of the roof and siding
On or around vents or where other pipes enter or exit the building
Roof and wall meeting points and corners
Busted windows, window screens, or windowpanes
Missing or broken brickwork
Holes in the siding

Step Two: Get them out.

Do not light a fire – you will burn the animals alive. If they are stuck they won't be able to get out quick enough to prevent being burned to death or suffocated with thick smoke.

Do not rely on repellents – sounds and lights very rarely work, although, they can be used in conjunction with other efforts. (For example, you can sometimes use lights and sounds to help move all animals out of a space quicker, with the intention of then sealing it up and preventing re-entry.)

Do not use poisons or fumigants – there aren't any legally registered products for bats and it is also illegal in most states.

Do not use traps – you won't ever be able to get on top of a bat problem if you rely on trapping methods. That colony can be ten, twenty, maybe even one hundred bats strong, so trying to get them out with traps will be like trying to empty the entire Pacific Ocean with a cereal bowl. You'll get one out, but another one still inside will have a couple of baby bats to fill the numbers. Also, if you're not sealing up the building or space effectively, there really isn't anything to stop those bats from coming right back.

It's starting to sound almost like you have very few options left, right? In reality, that's pretty much how the story goes. There is only one effective way to get rid of bats from a chimney or other area of a building, and that's through exclusion devices and sealing.

Regardless of HOW you manage to evict bats from that particular space, you won't be able to keep them out unless you seal it properly. Again, bats do not chew so you have more materials to work with than what you would have if you were up against a pack of rats, for example, which are well known for chewing everything and anything in their path.

Sealant can be expanding foam, wire wool, hardware cloth, and much more besides – you just need t make sure the bats can't get back in.

You can't call the job done until you have safely and effectively removed not just the bats in the chimney, but also any signs that the bats were ever there. Biological matter left behind can attract other bats, as well as attracting other animals. If you do not remove dead bats, the decomposing carcasses will attract flies, maggots, rats, and mice. The whole place will stink too, and that's before you even consider the damage guano (bat droppings) can do to the health of those who live in the building. Have you ever heard of Histoplasmosis? It's a disease that bats commonly bring to the party in their urine and feces.

Go back to the Bat Removal page, or learn about bats in the attic with my Bats in the Attic guide.