Bat in the House

Sometimes bats get into the house. There are a number of reasons why - perhaps you left a door or window open, perhaps the cat dragged it in, but by far, the most likely reason, at approximately 90% causation, is that you have a colony of bats living somewhere inside the house - the attic, walls, chimney, etc, and one (or more) of them crawled into the living space of the home. Is it common for bats to get inside the living areas of a home?

Now you've got a bat (or two) flying around inside your house! Eeeek! Don't panic. It's not going to attack you or fly into your hair. It really just wants to get outside. It feels trapped. It's probably flying around in fast circles, sometimes stopping to land and rest, and then fly again.

Learn about whether bat trapping is legal. 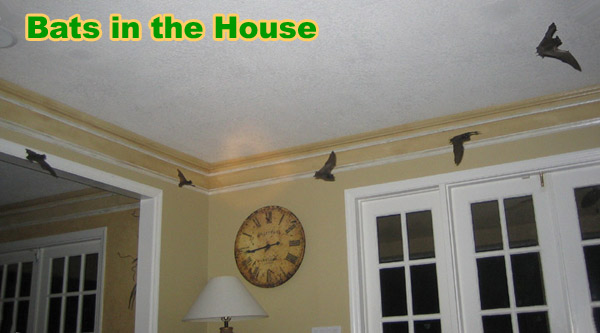 You have four good options:

Option 1: Open all the windows and doors - bats have good echolocation, and it may realize the window or door is open, and simply fly out.

Option 2: Catch it with a butterfly net. This is actually pretty hard, especially if it's on the wing. You might want to wait for it to land, and then net it. Be careful to close the top of the net and not crush the fragile bat, and then bring it outside and let it go.

Option 3: Trap it in tupperware or a jar, bowl, bucket, etc. Wait for it to land, exhausted, and then carefully place the tupperware over the bat against a wall or floor, and then slide a piece of paper between the wall and tupperware, and you've got the bat trapped. Bring it outside.

Option 4: Smother it in a blanket - drap a blanket over the bat, and then gently bunch it up and bring it outside and let it go. Remember, bats have very fragile bones in their wings, so be careful not to injure it. You can even remove it with thick leather gloves. You just don't want to get bitten. Bat's aren't aggressive, but if you're grabbing one, it'll defend itself.

Here's a photo of a bat in a butterfly net, and a bat caught with the tupperware technique.

Some people wonder, if a bat has been discovered in the house, should you get treated for rabies exposure. I really think that's overkill. Very few bats are rabid, and the chance that a rabid bat got inside and bit you without you noticing is very small. Then again, rabies is always fatal if not immediately treated, so you're not going to find one official piece of advice offered by anyone telling you to ignore it. So I guess I won't either. But if I found a bat inside my house, I personally wouldn't freak out. You do have the option of keeping the bat and freezing it and having it sent off to test positive for rabies or not. Better than getting the shots, I guess, but still a pain in the but that I personally can't officially advise you to ignore, but which I probably wouldn't bother with. Your call. What about your pets? Pets finding dead bats: what you should really be worried about.

Now, to address the important matter: how did the bat(s) get inside the house in the first place? Well, as stated, it's most likely because you've already got a colony of bats living inside your house somewhere. The most common time of year for bats to get inside the home is in August. Are you reading this web page in the month of August, by chance? The reason is because that's when the baby bats start to fly, and they're newbies - they get confused, they go the wrong way, etc. They crawl around, then they find a way to get inside the house. Sometimes the mother bat will follow the chirping of the baby bat, and the adult bat will get into the house as well. So to prevent a problem with bats in the living space inside a home, you need to remove the colony of bats before it comes to that. 5 property modifications that will definitely keep bats out

The author, David, is a bat removal expert with over 500 successful bat control jobs under his belt. I want to stress the importance of proper bat removal, and the value of these animals to the ecosystem. I've witnessed dozens of failed do-it-yourself bat jobs over the years, and it is not pretty - dead bats, horrible odors, rabies vaccinations, and so on. Bat removal work is not easy - I trained for two years learning, and even then, it took many jobs and hands-on training before I was competent. I highly recommend that you consult my list of wildlife control companies on the home page, and hire a professional to come out and look at your bat problem. Get a few quotes if you must.  And remember, do not perform any bat exclusions during the summer maternity months. For more general information and links, go to my main bat removal page.