How to Kill a Bat

I'm assuming you found this page because you have a problem with bats in your house or building. I have great news - you can definitely solve your bat problem 100%, all the bats gone permanently. I also have important news - using poison won't work, and is the worst way you can go about it.

Bats are easy to remove - they fly out of the house / attic / building roost every night all on their own. So all you've got to do is install a one-way exclusion device, like a one-way door or exclusion netting, and they'll fly out, and then not be able to fly back in, and your problem is solved! Doing this successfully all depends on making sure that every possible tiny entry point into the building is sealed shut, so that they cannot fly back inside. 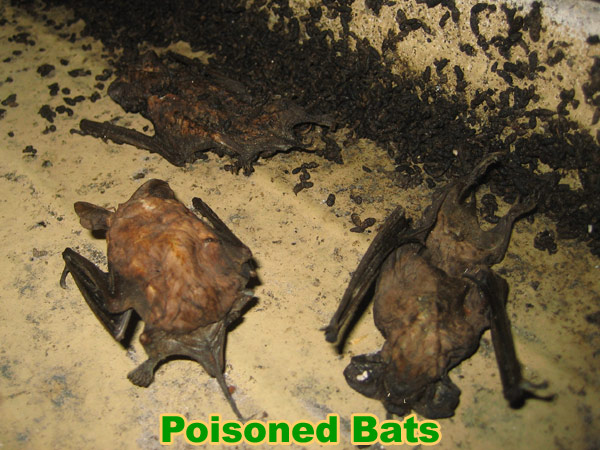 Bats are among the animals that cause the most fear among many people, but in reality the bats are much more likely to be afraid of humans than the humans should be of the bats. The portrayal of vampire bats hasn't done the species any favors either, meaning that many people who do find that they have bats in an attic or in an outbuilding on their property will want to get rid of them. Lethal methods of dealing with bats are available, but because of the nature of bats they are actually quite difficult to kill.

Using Poison To Kill Bats
Poisoning is one of the worst possible solution to dealing with a bat infestation, and the first reason for this is that bats are protected species and killing a colony will often lead to a hefty fine when the authorities find out. Another problem with using poison is that the bats will often die in the attic or roof cavity where the poison has been laid, and this can actually cause a significant odor problem too. Before you try and kill any bats using poison it is well worth considering the risk that some bats will become afraid and will actually climb down into your home, and this can be particularly frightening for the residents as well as for the bats. Read more about Should I ever poison a bat?

Knives/garden tools/tennis racket
Some jerks kill them with garden tools, or on the fly, tennis rackets. It requires skills and experience and you need to be really careful. Protect yourself with a pair of leather gloves to avoid a bite. To kill it, you will have to strike it quickly with lightning speed. It surely is a dangerous method as an injured or disturbed bat might bite back to protect itself.

Glue Boards And Traps
There are some people who will use glue boards and bat traps to try and kill bats, and these can also cause more problems than solutions. Glue boards are particularly cruel as the bats will only land there for a short while, but will then not be able to fly away again. This means that they will suffer a long and painful death, and it really isn't effective, as only a small number of bats in any roof cavity will actually land on such boards.

Trapping bats is also a problem as they do not have a particularly good method of navigation in cage traps, and whether the traps are live or lethal the bats can become injured and suffer in such traps. The problem with all of the methods of trying to kill a bat is that it doesn't really provide a realistic solution to a bat infestation, as there can often be tens or even hundreds of bats living in one roof cavity, and these kind of traps will only kill a small number, and will also leave rotting carcasses in the area.

The Successful Way To Deal With A Bat Infestation
The best way to deal with bats is by actually getting them out of your attic or roof cavity without killing them, as this means that decontaminating the area will be a much smaller and cheaper job to do. Excluding the bats from the attic is a fairly straightforward process, but most people will want to get a professional in because of the dangers that are associated with dealing with bats. Although they aren't aggressive animals they can bite when frightened, and bats are known as carriers of rabies. They also carry a number of other diseases, and there are also diseases transmitted by their feces too.

What the bat removal expert will do is to examine the roof cavity to find all of the way that the bats are getting in and out of the property, and then to start sealing them up. Then they will install a one-way exit over one or two of the remaining entrance points so that the bats can leave but can't get back in. Once all of the bats have left this can be removed too, and the remaining holes sealed. This is also a permanent solution and will prevent more bats from getting in to the attic or roof space.

For more general information and links, go to my main bat removal page.