How To Trap A Raccoon

ONE: If the raccoon is living inside the house somewhere, such as the attic, there are most likely babies. So do not trap the adult female until you have removed the young, by hand.

THREE: If you have the babies inside the attic removed, or if there's no way to prevent the raccoons from causing mayhem, trap and remove. Check your local state laws first. It may not be legal for you to trap, or it may not be legal to relocate raccoons.

FOUR: Purchase a large cage trap, at least 32x10x12. Set it on a flat surface, and make sure it doesn't wobble. Make sure it is clear of debris. Make sure it is not out in the sun. Bait it with marshmallows or white bread.

FIVE: Monitor the trap frequently. It may misfire, you may catch a stray cat, you may leave an animal suffering in hot/cold weather, etc.

SIX: When handling the trap, be very careful. Raccoons can reach out of the cage several inches. Wear thick leather gloves, and hold the trap away from your body.

SEVEN: Relocate the animal at least ten miles from the capture site, or it will return. Be careful when releasing it.

EIGHT: If you don't fix whatever attracted the raccoon in the first place, you will continue to have problems.

Below is an email that I received. I recommended that the person use the Havahart 1078. While this person seems nice, the email points out several problems that can occur when homeowners try to trap raccoons themselves. From failures to escaped animals, to breaking the law (it's illegal for an unlicensed person to trap and relocate raccoons in his state) to the possibility of killing or orphaning young raccoons, it's often best if raccoon trapping is left to professionals.  Regardless, he did send an amazing photograph of seven juvenile raccoons in a tree.  Here is the email.

David, looks as if you do great work. I have enjoyed your pics and blogs, very informative.

My wife and I have recently relocated 17 raccoons out of our neighborhood. These are amazing animals and we did not want them to be euphemized.

Like a Bugs Bunny cartoon, we sit with a string on the door of a large dog cage and wait for them to feed. We did feed a few outside cats and the coons started coming around. A momma had babies, was coming out at all hours. The neighbors were leery and the coons were causing some attic damage, so they had to go. Since they were use to us, we were able to trap and relocate them fairly easily. Marshmallows are definitely key :) We realize our error now, and have since stopped leaving out the food.

Sadly, we did lose one of the 17 as it managed to get out of a 1" x 9" opening left by slack in the door of a true "trap" we were using. We only used this trap once and will not use it for Raccoons again. This was a large male and I was AMAZED and STUNNED that he was NOT in the trap when we reached our relocation destination. Poor guy got out and took a leap out of the truck at @ 40 MPH. I had heard that they can really compress their bodies down, but I did not think it possible for him to escape the cage...WOW!!!

What is a recommended trap that has NO SLACK that we can use in the future if needed? We do have some large, smart males that don't fall for the Bugs Bunny trick. A cage we can trust them not to escape from will be ideal.

Attached is a cool pic of 7 babies that momma had in the attic. 5 of them over the weeks separate from momma and have gone their own way. We were able to relocate momma and 2 of the smaller babies she still had with her...All 3 in the cage at the same time. We had another momma with 5 babies we were able to get in the cage all at once as well. Pretty efficient :)

Keep up the good work and any info you can share on a good sturdy trap would be great!!!

Thanks for all that you do,
Mike & Alex 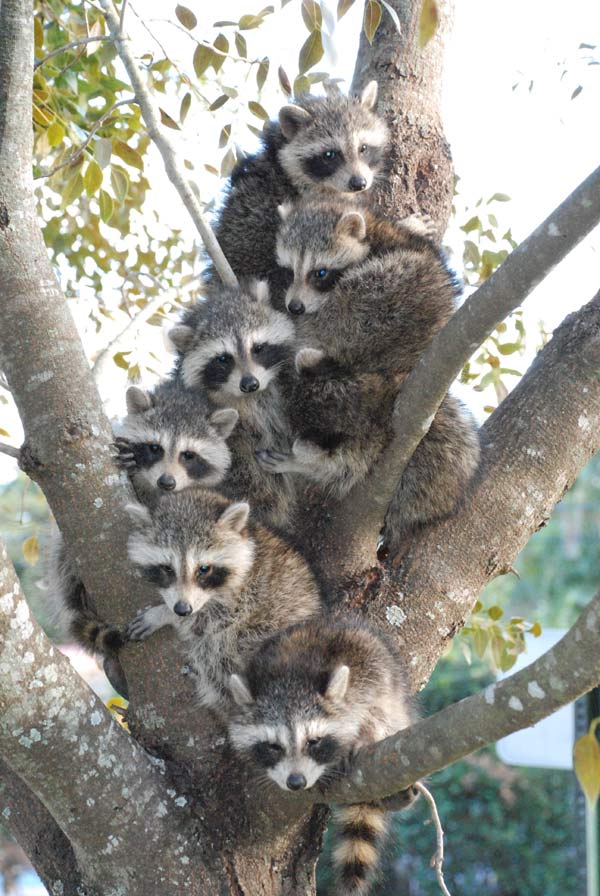