Need fox removal in your hometown? We service over 500 USA locations! Click here to hire us in your town and check prices - updated for year 2020. 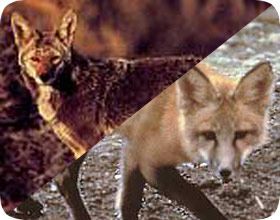 Coyote and fox are usually classified as a pest species due to their predation habits. The most common complaints include the following:

For these reasons, many people wish to have these nuisance canines trapped and removed. Not all trappers provide this service, but some specialize in canine snaring and capture, as part of a predator abatement program.


FOX BIOLOGY: The Red Fox (Vulpes vulpes)is a fairly small canine, about 2.5 feet long and 8-14 pounds. It can vary in color, from orange to gray to silver or black. Females bear one litter of pups per year, and the number of young and the time of year can vary quite a bit depending on latitude and conditions. Fox average a lifespan of three years, but can live up to twelve years in captivity. Read the full guide About Foxes.

COYOTE BIOLOGY: The Coyote (Canis latrans) is about three feet long and 20-40 pounds. They are primarily grayish-brown. They breed once a year, in late winter or early spring, and produce a litter of young that can vary widely in number. They can live up to ten years in the wild, or twenty in captivity.

FOX & COYOTE BEHAVIOR: Fox are solitary animals. They live in dens. They establish a home territory, on which they hunt. They primarily eat rodents such as field mice or cottontail rabbits. Coyotes are similar, but they sometimes eat larger prey. They will eat a wide variety of foods, and will often scavenge. Coyotes are very adaptable, and will often live in urban areas. Both are mostly nocturnal.

NUISANCE CONCERNS: Fox are known for raiding chicken coops and killing poultry. Other than that, they're relatively harmless. They're mostly shy and secretive animals. Same for Coyotes, although they can kill larger prey.

FOX & COYOTE DISEASES: Both can carry rabies, just like any canine. Beware of any wild animal that displays unusual behavior, such as lack of fear, inconsistent walking, etc. Read the guides How to Tell if an Active Fox is Sick or Rabid and Diseases Foxes Carry and Their Symptoms.

HOW DO I GET RID OF FOX & COYOTES? The best method is trapping and removal. Many wildlife control specialists excel at canine trapping. In many areas, it's a lost art, since not as many people fur trap as in ye olde days. However, many nuisance trappers have learned to adopt the fur trappers' techniques in order to catch these animals. Some wildlife operators are in fact former (or even current) fur trappers. There are many techniques, some of which I consider inhumane, and some of which are antiquated. For more information, read my how to catch a fox page or read the guide ways to get rid of foxes.

CAN'T I JUST USE A REPELLENT? There is no known effective repellent or deterrent device to keep fox or coyote off of a property.

Coyote Email From Reader: Hi, I, my children and neighbors have seen what appears to be coyotes in Country Club Hills. Upon talking to the Country Club Hills police about the problem, they were very dismissive about it saying that the animals are just looking for food. That may very well be the case, but if there are leash laws, are there also laws regards animals running wild? Is there anything that your organization can do to solve this problem? Thank you for your consideration. Veronica

My Response: I don't think leash laws pertain to coyotes. Anyway, coyotes won't attack and eat your children in the night. But if the animals concern you, you can hire a professional trapper of of my wildlife removal directory.

Coyote Email From Reader: I need some suggestions on how to get rid of red foxes living under a building. Trapping is not an option. I have talked to a Wildlife Group in this area and they recommended fox urine. This was applied to tennis balls and rolled under the building where the foxes are living. It has been a week and they still haven't moved out. Do you have any other recommendations? Thank you, Martha

My Response: You can try fox urine, and if that doesn't work, just hire a trapper off of my directory.

I have now divided this page into two pages, one for fox, and one for coyote. Here is a list of the new pages:

FOX
fox removal
how to catch a fox
how to kill a fox
how to get rid of a fox
fox under a shed, deck, or house
how to trap a fox - trapping tips
are fox dangerous to people or pets?
fox repellent and prevention
are foxes good pets?
what is the fox's habitat?
should you poison a fox?