Need coyote removal in your hometown? We service over 500 USA locations! Click here to hire us in your town and check prices - updated for year 2020.

It has been proven that fox can be domesticated, at the famous Institute of Cytology and Genetics at Novosibirsk, by Dmitri Belyaev. The basic gist is this: just look for the baby foxes that are most docile and friendly toward humans, and selectively breed them! In just a handful of generations, boom, domestic fox!

Now there is mounting evidence nationwide that coyotes are becoming naturally domesticated, just like wolves were domesticated into house dogs. A human coyote breeder can achieve the same results by selecting for docile and friendly coyotes. 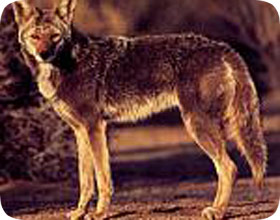 Can Coyotes Be Domesticated And Kept As Pets?

One of the things that many people will consider is whether coyotes can actually be domesticated in a manner similar to dogs. There are cases where pups have been raised by humans from a very young age, but in most instances they will not make very good pets at all. There are plenty of situations in which dogs have bred with coyotes, and the pups from such an union are often much more domesticated if the female is a domesticated dog. Alas, this website has no resources for you to buy a pet coyote pup.


How Coyotes And Humans Live Side By Side

Coyotes are animals that have adapted well to the growth of humanity across North America, and this has often led to conflict in many areas. However, there are some positive things that can be seen about the coyote, and there are some situations in which the coyotes can live alongside humans without too much conflict. These animals do look similar to dogs and wolves, but they are a very distinct species although there are some examples of interbreeding between these species.

What Are The Hazards Of Contact Between Coyotes And Humans?

One of the biggest issues that is to be found with coyotes is the number of diseases that can be transmitted to humans that come into contact with coyotes. One of the biggest problems is that of rabies, and as well as being transmitted directly from coyotes to humans, it is also very possible that the coyote can transmit the disease to a domestic pet, which can then become aggressive to its owners. Another disease that can also be transmitted by coyotes is Tularemia, which can cause a number of problems in people including fevers, headaches and pains in the muscles and joints.

Another of the problems that will occur is when a human will confront a coyote, and this can happen in urban areas where the animals scavenge or where a person will accidentally walk into the home territory of the coyote. Most of the time coyotes will back away and look to avoid confrontation, but especially in urban areas the fear of humans has reduced significantly. There are actually documented cases where coyotes have attacked young children and adults, with two documented fatalities in the United States from coyote attacks.

A major problem with domesticating coyotes is that they have a natural wariness of humans, and it can often take two or three generations for the animals to change this attitude towards humans. Another issue is that coyotes are a lot more unpredictable than dogs, and are naturally inclined to identifying weaknesses in potential prey.

The diet of the coyote is not one that will be difficult to replicate in a domestic situation, as they are very similar to dogs and can live on such food. It is important not to feed wild coyotes however, as this is something which will help to reduce the fear that coyotes have of humans, and they really cannot be domesticated from the wild. Training a coyote as a pet from a very small pup is something that can be achieved with care and a lot of work, but for the vast majority of pet owners having a coyote will be hugely impractical and could end in the animal attacking the owner.

The Continuing Relationship Between Coyotes And People

The number of attacks on people by wild coyotes is something that has been on the increase, and it is a truly worrying prospect for those living in urban areas that have sources of food to be scavenged. Domestic animals are likely to be more at risk than people themselves, and if a dog or cat is bitten by a coyote, it is vital to get them tested for rabies or other diseases as soon as possible.

What do you do if you want to buy a baby pet coyote puppy? In all honesty, I don't know. I apologize for this.

For more information, go back to my main coyote removal page.