How can you tell if snake is poisonous

With the exception of the Coral Snake (see pix), all poisonous snakes in the USA are pit vipers. This means the Copperhead, the Cottonmouth, and many species of rattlesnakes. These snakes are really fat, with big, fat heads. They have slits for pupils. The rattlesnakes have rattles on the end of their tails. So they're pretty easy to identify. 99% of the time, the snake you see will not be venomous. If it's a thin snake, it's safe!

Remember, all snakes have triangular heads, and most have colors and patterns of some type. So those clues won't help you. If in doubt, just leave a snake alone, or Click here for my nationwide list of 100's of professional snake trappers serving all 50 states, who can correctly identify and remove a snake for you. 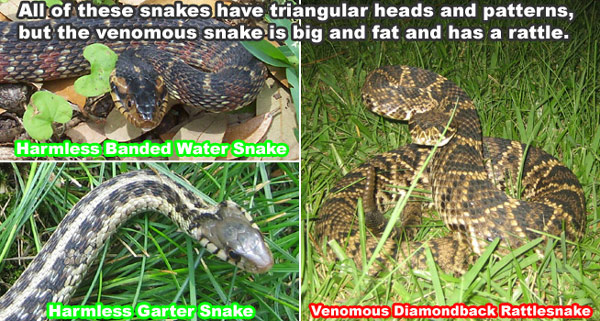 Below are some example snake photos. You can see that the non-venomous snakes are thin. The pit vipers, like the black Cottonmouth and the Diamondback Rattler are big and fat! And the red-yellow-black coral snake is hard to miss. If you are having trouble identifying a Coral Snake, read my Snake Color Rhyme for Coral Snakes guide.

Venomous Snake vs Poisonous Snake - Venom is an actively injected protein, and poison is basically anything you injest that makes you sick. So snakes are venomous, not poisonous. Mushrooms are poisonous, not venomous.

How to know if a snake is venomous - There are no infallible ways to tell if a snake is poisonous. There is almost always an exception to the rules. The majority of venomous snakes in North America will follow these classic depictions: First, pit vipers have heat-sensing pits on their snouts. These nodules allow the snake to stalk prey without actually seeing it. A snake with heat-sensing pits is venomous. Triangular heads are another commonality in most venomous snakes. The rattlesnake, copperhead, and water moccasin all have arrowhead faces. If you can get close enough to see, pit vipers also have pupils that are oblong, like a slit. Relying on these characteristics will be helpful but not foolproof. The exception to all of the venomous snake rules is the coral snake. Not only is the coral snake the deadliest out of all the venomous snakes, it has none of the tell-tale features that indicate danger. The coral snake has a rounded head, round pupils, and no heat-sensing pits. It is far more colorful than the other snakes, and is much less common. The coral snake has its own special rhyme to verify its deadliness: Red touches black, safe for Jack. Red touches yellow, kill a fellow. 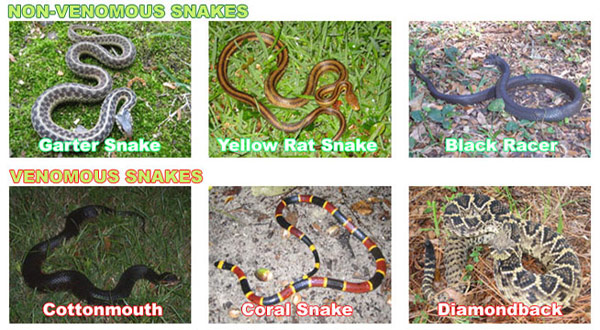 How do I know if a snake is poisonous - There is no way to be completely sure that a snake is poisonous. There are some general rules of identification that may help you; however, there are some deadly exceptions. The rules for telling if a snake is venomous or not have to do with coloration, pupil shape, head shape, and location of heat-sensing pits. Most of the poisonous snakes in North America are what we refer to as pit vipers. Pit vipers get that name because of the heat-sensing pits beneath their eyes. They have triangular heads and pupils that look like slits. Vipers also have fangs that lay flat inside their mouths, attached to venom sacks. Some people think that bright colors are indicative of a venomous snake, but there are far more nonvenomous serpents in America than there are poisonous ones. The exception to the rules regarding pit vipers is the coral snake. Coral snakes have a rounded head and round pupils. They have no heat-sensing pits and they have no retractable fangs. The venom pouches in the coral snake’s mouth are adjacent to the teeth, and venom seeps in through wounds rather than being injected. The best option if you see a snake that fits any of the above description is to avoid it. You should not be randomly picking up snakes. Unless the animal is in your home, do not handle it.

North America neurotoxic snake - There are, in fact, two neurotoxic snakes in North America but only one is deadly. The garter snake has been discovered to use neurotoxic venom to subdue its prey. The amount of venom delivered by this snake’s bit is so miniscule it would have no effect on a human. The snake you need to worry about, and not even really worry that much about, is the coral snake. Coral snakes are deadly, though no deaths have been reported from bites since the 1960’s. This has a lot to do with the rarity of the snake and the successful antivenin that was developed. A coral snake is the exception to almost all of the North America venomous snake identification rules. They have no heat-sensing pits, no pupils shaped like slits, and the coral snake’s head is not triangular in shape. They are, however, very colorful, something that can be used to identify them if you can remember the coral snake rhyme. The venom in a coral snake bite is not injected like the venom of a pit viper. The coral snake allows its venom to seep into the wound as the snake holds on to its victim. This is why, unlike a viper, the coral snake will bite and then hold on to the prey for as long as possible. The longer it can stay attached, the more venom is delivered into the bloodstream.