I'm pretty proud that I was able to catch Coral Snakes, and my good friend Ben recently caught a rare Scarlet Kingsnake in the wild (snake removal customer call), and that I've taken good photographs of both snakes side by side for comparison. 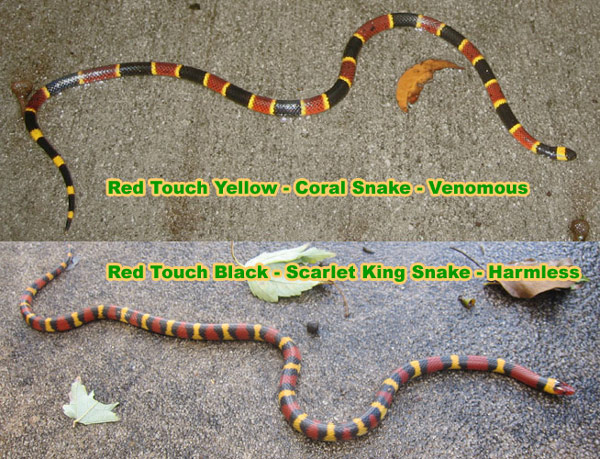 If the snake has a black nose, it's a Coral Snake. That's a good hint.

Snake poem to identify dangerous or poisonous snakes - The snake poem is a good way to tell a coral snake from a nonvenomous snake like a milk snake or a scarlet kingsnake. Though there is no harm in assuming all colorful snakes are dangerous, a lot of unnecessary killing of harmless snakes has happened out of confusion. While many versions of the rhyme exist, they all have the same principle idea: Red touched black, safe for Jack. Red touches yellow, kill a fellow. This is how to identify a coral snake. Red bands will always be touching thinner yellow bands. You cannot apply this song to any other region of the world. Many species of coral snakes exist. Each one is venomous, but the colors are nowhere near the same. In reality, there is no need to handle any snake you stumble on in the wild. If it is colorful, keep your distance and leave it alone. There is no need to prove your bravery by sidling up to it or poking at it with a stick. Most venomous snake bites happen because someone was harassing the animal.

Snake red touches yellow picture - The North American Coral snake is the animal you need to find a picture of if you want to see the ‘red touches yellow’ rhyme in action. The coral snake is similar in coloration to the milk snake and the scarlet king snake, though only the coral snake is venomous. A picture is a good way to understand how the color pattern on the snake is laid out. The red band is thicker than the yellow band, but the two are touching. Black bands also touch yellow bands but never touch red on the venomous snake. You will rarely see a coral snake out in the wild. They like to stay in their dens during the day, and emerge at night and in the morning hours to hunt prey. Unlike most venomous snakes, the coral snake will bite its victim and then remain attached. The longer it can keep its hold, the more venom is poured into the wound. The coral snake does not inject its venom. The sacks are not attached to the fangs but are adjacent. The toxin must seep in through the puncture holes. Bites from this snake can go without symptoms for half a day. This can be dangerous, as people think they were bit by a harmless milk snake because they feel no immediate effects.

If yellow touches white on a snake is it poisonous - Well, it depends on what part of the world you are in. There are thousands of snake species across the globe, and more likely than not, there is a yellow and white snake out there that is venomous. If you are looking at North American snakes, the snake rhyme has nothing to do with white markings. The rhyme goes, ‘red touching black, safe for Jack. Red touching yellow, kill a fellow’. This is the only rhyme that will identify a coral snake, one of the deadly serpents in North America. It is important to acknowledge that the snake rhyme poem does not apply to all areas of the world. Many other coral snakes exist with many other color patterns. All of them are poisonous. As for the yellow touching white rhyme, there are no snakes in North America that are identified with this song. Read more about coral snake look alikes here. If you are in doubt, leave the snake alone. Most serpents are transient and will leave your property after a few days. Do not try to kill the snake. Most snake bites happen when someone is attempting to handle or kill and snake with a garden tool. If you must have the snake off your property, call a snake professional or purchase a trap.

If red touches black is it poisonous? - No. Red touch black is safe. The coral snake is the one venomous snake in North America that does not fall into the classification of a pit viper. This snake has no heat-sensing pits, no triangular shaped head, and no slit-like pupils. The coral snake is the exact opposite of a pit viper in description, and that prompted the creation of a rhyme to distinguish the venomous snake from similar, nonvenomous cousins. The coral snake rhyme varies from person to person, but the general premise is the same: Red touch black, safe for Jack. Red touches yellow, kills a fellow. The coral snake will have bands of red touching smaller bands of yellow. It is very uncommon to find a coral snake. These animals like to hunt in the early and late hours of the day. They are very reclusive, even among their own kind. When a coral snake bites, it holds on to its victim instead of letting go. This is another difference between the coral snake and the pit viper. Coral snakes do not inject their venom; they allow the venom to seep into the open wound. The longer the snake is attached, the longer poison has to enter the body.