The below photos should help you properly identify the animal poop that you see. These are pictures of snake poop. If you see these types droppings in your attic or yard, they were made by a snake. 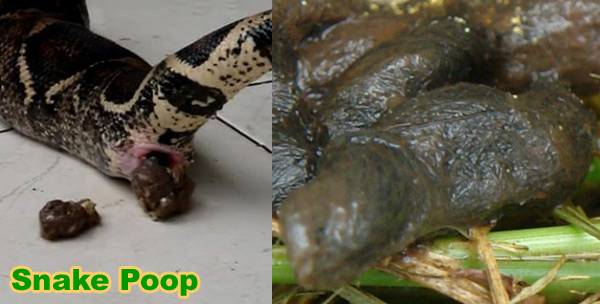 Snake feces, known in layman’s terms as snake poop, is just like any other animal’s waste matter. It smells, it’s often brown, and it happens as often as the animal eats. Snake poop, especially that of snakes with a rodent-rich diet, is an oblong, liquid excretion with a white cap of urea. This combination of kidney waste and intestinal waste is due to the fact that snakes have a cloaca. The cloaca is a joint opening near the tail of the snake.

Snake poop is often mistaken for that of a bird. Birds have a much higher portion of urea in their waste, so their stool will appear much whiter than that of a snake. Snake feces will also have hair, bones, scales, or other solid pieces left over from the ingestion of an entire body of a prey animal. Another type of feces often mistaken for snake poop is that of a lizard. Lizard waste is often in pellet form whereas snake waste is in long streaks or deposits. These are the only three types of animals that eliminate waste with white deposits. If there is white present, the stool is from a snake, a lizard, or a bird.

In order to get snake poop, the animal must first digest its food, a process which is very intricate. Because most snakes eat their prey whole, the energy requirements of the body for digestion are intense. During this process the snake will go into a dormant state, expending the least amount of energy possible on other activities. After 48 hours, the snake will be in full digestive mode, using the ambient air temperature to facilitate the process. Optimal digestion occurs at 86 degrees Fahrenheit. All portions of the prey animal are broken down by enzymes within the stomach. Only bones, feathers, teeth, and other hard substances pass through the digestive system to be excreted as waste. If a snake is interrupted during the digestive process, the animal will often regurgitate the meal so it can focus its energy on escaping.

There is no definitive way, short of genetic testing, to determine what type of snake is leaving scat deposits in your yard or garden. Size of the poop will tell you the size of the snake. A copperhead snake will leave a much more sizeable deposit than that of a garter snake. The contents of the feces will also give you a clue as to which snake species you are dealing with. A snake with scales in its poop will be a species that eats other snakes like the coral snake or the kingsnake. Feathers and bones are more ambiguous, but only a medium sized snake will take on small mammals and birds. A working knowledge of the snakes in your area will help provide a clue as to what animal is leaving markings around your home.

Snake poop smells just like any other poop, and if you are having a problem with snakes in your home or on your property, build-up of fecal matter can be a real problem. Snake poop contains salmonella bacteria, and has been linked to severe illness in humans. Salmonella bacteria cause salmonellosis, a type of poisoning responsible for serious gastrointestinal distress and hundreds of fatalities annually.

When handling pet snakes and reptiles a person should take extra care to thoroughly wash their hands prior to touching any other surfaces or food products. This rule applies to cleaning snake cages and handling snake feces. Gardeners should practice good sanitation and wear glove while digging in the soil Snakes eliminate waste wherever they travel. If you have seen a snake in your yard, you can assume there is snake poop out there as well. Children in areas with high snake populations should be encouraged to wear shoes while outside to prevent accidental exposure. Where there is snake poop, there is usually a snake. Because there is no way to tell species of snake by the feces seen, you should always assume the snake is dangerous and wear proper foot and ankle protection.

Poop snake pictures and photographs - There is no such thing as a poop snake unless you are speaking of nicknames with questionable company. There are brown waters snakes, and snakes that are brown in color, but none of them have such an endearing title. Chances are you’re really wondering what snake poop looks like. For starters, it’s usually brown, just like most other animal droppings. In fact, it is very difficult to distinguish snake poop from the poop of other carnivores. It may have streaks of white urea along it or a white urea cap. Even with this characteristic, snake poop is decidedly average. The droppings will be more liquid than solid, with no distinct form. This is the result of a lack of plant fiber in the diet. In larger reptiles, you may be able to discern bones, nails, or teeth within the waste. These items are indigestible and pass through the intestinal system in their original state. Snakes poop infrequently, so do not expect to find multiple droppings within a small area. If the snake has not eaten in a week, there will not be a lot of excrement. Finding snake poop does not benefit you in many ways. Snakes live in most areas of the country. If you live in a rural setting, you should not be surprised to find evidence of snakes around your property.

Here are some other snake links:
How To Trap Snakes
What Animals Kill Snakes
Color Rhyme for Coral Snakes
How Can You Tell if a Snake is Poisonous
How to Kill Snakes
Snakebite Aftercare
Snake Safety Tips
How to Catch Snakes
How Do You Keep Snakes Away
Do Mothballs Keep Away Snakes
Eastern Coral Snake
Eastern Diamondback Rattlesnake
Snakes in the Attic

One of the anomalies about snakes that many people will never even think about is how do they defecate, and when they do what does snake feces actually look like? The reality is that it is actually quite mundane and similar to that produced by other animals, although the one difference is that the urea and the solids are passed together. The other differences generally depend on the diet of the individual snake, with the material passed out through the cloacae, one hole which allows the snake to pass all of its waste at the same time.

Snake Feces Is Runnier Than With Mammal Feces

An important factor that can be used to identify snake feces is that it is usually runnier than that produced by other animals around the edges. This is because a cap of urea is produced and expelled by the snake at the same time as the feces, which is why it can often appear a little more fluid. The consistency can also be a little more mushy if you do have the inclination to try and press it or move it.

The Color Of Snake Feces

This is something that can vary depending on the diet of the individual snake, but largely it will be similar in color to the feces of most other animals, ranging from brown through to a dark gray color. One thing to note is that it will often have a light color on the top of the feces when it is fresh, which is another side effect of the urea and the feces being produced together.

The Size Of Snake Feces

This is one factor that can vary significantly depending on the species of the snake, but you will usually find that the larger the snake, the more feces they produce, although in a size comparison they often produce more than other animals of a similar size. This is because the eat live animals whole, which means that they will often have more of the animal that their body cannot fully process.

What You May See On Close Examination

The other aspect that comes with eating whole animals is that you will often see parts of those animals that couldn't be processed showing in the feces. If you do take a close look at snake feces, you will often find that there is fur and other parts of the animals that you may be able to identify, which can be useful if you are trying to identify a particular pest animal in your garden.

Go back to the Snake Removal page.