How to Kill a Pigeon

Need pigeon removal in your hometown? We service over 500 USA locations! Click here to hire us in your town and check prices - updated for year 2020.

I discuss the various options below. Shooting. Poisons. Trapping. Even rice and alka seltzer.

Killing is by no means the only way to effectively get rid of pigeons. Yes, they keep coming back once they pick a spot to roost in your house and they can constitute disturbance of great magnitudes. They can be prevented from coming to roost in the first place, but perhaps you missed out on that step and now need to put a stop to the havoc on your balcony, garden, farmyard, or ledge? Luckily, you CAN do something to keep pigeons away - needle strips. They come in metal and plastic, and they prevent birds from roosting on unwanted areas, like ledges, beams, signs, roofs, etc. Netting and shock track also work, and some other physical deterrents. You can install them yourself, or if you need professional pigeon help Click here for my Nationwide List of Pigeon Trappers. Well, if you have your mind made up already, here are some ways to go about killing them pigeons. 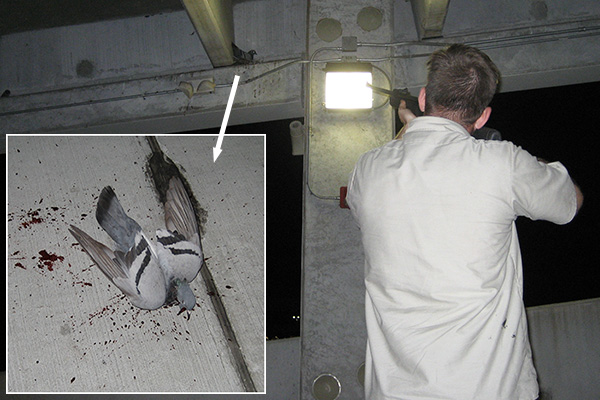 1. Shooting
Shooting is an old and conventional method of killing pigeons. It has been practised since the days when people used to hunt and kill pigeons for food. Nevertheless, people still use it today in getting rid of these flying creatures. An air rifle can be useful in this regard, but it requires great marksmanship to record any much success. The best time to hunt pigeons is at night when they are usually inactive.

There are a lot of problems associated with shooting pigeon though. Even though you target and shoot a pigeon well, the bird is not likely to die instantly and may fly to some other place. If this happens, it will pass through severe pain before eventually dying and that is too inhumane. Shooting is also not suitable in urban places, so it is mostly restricted to rural areas.

2. Poisoning
The use of poisons to kill pigeons is severely restricted in many countries, and requiring a special license in some. Poisoned bait as is mostly used, also has some repercussions – like a poisoned bird being eaten by wildlife in the neighbourhood or even household pets; this leads to the death of untargeted animals. Read the guide Should You Ever Poison A Pigeon?

Another shortcoming of poisons in killing pigeons is that they may finally die in hidden areas on your property where the carcass will cause a huge stench. This also leaves you with the responsibility of disposing the rotting, disease-ridden carcass. Nonetheless, there are several poisons that people use to kill pigeons and other birds in general. Each of these uses a different mechanism to eliminate pigeons.

Alphachloralose - this poison is usually given to pigeons in the form of treated grains. You should first feed them with grains that are not poisoned for a few days, so as to attract more pigeons to the feeding spot. Alphachloralose makes them feel stupor-like and they later die. With this mechanism however, they are highly likely to die in unwanted places, like where scavenging wildlife or domestic animals will feed on the carcass and get poisoned too.

Avitrol – it contains 4-aminopyridine, which is a central nervous system toxicant. It causes convulsive reaction for hours and in pigeons, it is characterized by falling and flapping before finally giving up the ghost. Though effective in killing pigeons, it can as well kill other animals, so watch out for neighborhood pets.

Thallium - this composition can be administered to pigeons through inhalation or oral consumption. It is a tasteless poison that can be mixed with their feeds or even dissolved in water. Thallium induces nausea, vomiting and pain before killing them.

3. Lethal trapping
Pigeons can also be killed with lethal traps, which usually come in the form of cages with a constricting or snapping mechanism that does the killing. Exercise utmost care when using a lethal trap, read and understand the instructions in the manual well so as to set it correctly and not get injured while at it. You may also call in an animal control professional to do the job.

Set your trap in a vantage location where the birds have taken to roosting and bait it with grains, seeds or fruits. Before this, you should feed the pigeons at same spot for some days in order to make them feel safe. This method however, yields little success because these smart birds will quickly decipher the danger and thereafter avoid the trap.

A better way to go about killing pigeons with traps is to use live traps. Although live traps are not meant to kill, the birds can be captured killed manually. Captured pigeons can be killed humanely by putting them in a confined place and introducing poisonous gas or by snapping their necks with special pliers. Read more about pigeon trapping and how wildlife rehabilitators handle pigeons.

4. Rice or Alka Seltzer
Will uncooked rice kill pigeons? Will it expand in their stomach and cause them to burst? Nope. They can metabolize it just fine, and if push comes to shove, they will just throw up. Birds can regurgitate, you know! So the answer is that rice will not kill birds of any kind.

Will alka seltzer kill pigeons? No, not any more than you or me, because like us, birds can burp out the gas. Read more about Steps to Find and Remove a Dead Pigeon.

For more info, go back to my main Pigeon Removal page.