Dead Animal In Vent or Duct

I get a lot of calls about dead animals inside the ducts, vents, or AC system of a house. First of all, I will say that sometimes animals do die in the ductwork or vents. I've seen it happen about ten times. However, it's FAR more common for the animal to die under the house, or in the attic or walls. The odor molecules congregate in one spot, and then when the homeowner turns on the air conditioning or heat, the air gets circulated and the stench gets swirled around and you suddenly get a big whiff of it, and you assume that the animal is actually in the heating/cooling system ducts. But that's not usually the case. 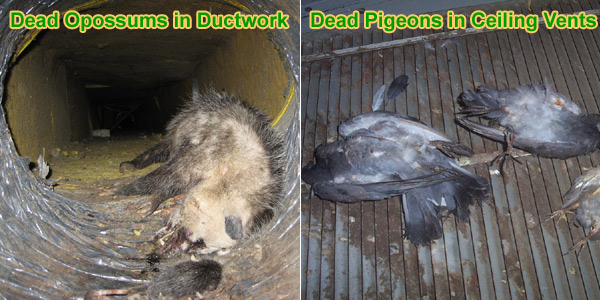 In the above photos, we do see a couple of cases of dead animals in the duct work. If you've got ducts under the house, it's possible for an animal like a raccoon or opossum (pictured above) to either rip their way into the duct or take advantage of an opening in the duct. But it's actually not too common. In the other photo, I was at a school, and pigeons were entering an open roof vent and living in the duct work, making nests and pooping, and many of the birds died. This actually caused a health risk for the school, because pigeon droppings can grow mold and fungus that can cause lung infections. But the school wouldn't pay me just a few hundred dollars to remove the live birds and nests, fix the roof vents, and clean out the dead birds and poo. I guess schools are broke and don't care about the health of the students. Oh well.

If there are dead animals in the ducts, finding and removing them can be a bit challenging, but I'm up to the task. The job is made easier by the strong stench coming from one or two particular vents, and then I can trace them back and get an approximation of the spot where the dead animal lies.

Once I remove the dead animal(s), I mop up any bodily fluids and maggots, I remove any soiled insulation, and I spray down the area with a special enzyme-based cleaner that destroys biohazard waste. The removal of the dead carcass is 90% of the problem, of course, and if you let the house air out after that, (opening windows helps) the odor will be gone very quickly. If you don't remove the dead animal, the horrible stink will remain in your house until the animal completely decomposes and gets eaten by maggots, and the whole process will take a little more than a week with a small animal like a mouse or rat, and over a month with a big animal like a raccoon or opossum. I do recommend that you have the animal removed. The bad smell will go away within an hour. For more information about dead animal removal from various areas, read the below articles.

My name is David, and I am an expert on dead critter carcass extraction from homes and buildings. If you have a deceased animal in your house, I can remove it. If you don't live near me, click on my home page, and I have listed hundreds of wildlife removal companies who specialize in dead wildlife body removal, odor control, waste removal, and deodorization.

Dead Animal Email Sent to Me: Hello, I wish you had a clone living in Albuquerque, New Mexico! This is the third spring/summer we've struggled with the bad smell of decomposing mice or rats and we can't find anyone locally to help. This problem doesn't seem to be common here. We live on the outskirts of town so we have a lot of wildlife including a lot of mice and desert rats like pack rats. We had bait houses around the outside of the house but we're afraid maybe that contributed to our problem so we stopped. Snap traps haven't caught anything, however. The smell starts up when the weather gets warm. It can't take three years for a mouse or rat body to decompose, right? So we think we get new critters coming in to the same place(s) and dying. This year we had a lot of slow moving flies showing up in the same vicinity, do we have maggots in our walls too? eewww! How do we locate the spots in the wall or ceiling? The smell hovers around the master bath, master closet and close-by half bath and hall area. That's a lot of walls and ceilings. The odor intensity seems to move around from area to area. Sometimes the smell is especially strong at electrical outlets which lead into the walls. The AC vent areas and air coming out smell bad too. How do we pinpoint where to open up a wall or ceiling? We suspect there are several locations and then how do we know where they're coming in so we can prevent the cycle starting over again? Where are the most likely access points? Help! Thank you! Tom and Kristin

My response: Believe it or not, the only way to find the exact area where the dead animal lies is to stick your nose directly on the walls and ceiling, and sniff around like a dog. It's very rare for animals to actually die in the duct work. When you hit the exact spot, you'll know, because the smell is not only stronger, it's very different.


What Should You Do If You Find A Dead Animal Inside Air Conditioning Ductwork?

Although it can happen that a wild animal has climbed into the air conditioning ductwork and died, there is actually a much higher chance that the animal has died somewhere else in the house, but the air conditioning system is just making it worse when turned on. Because the system is passing air around your home, the stench will get worse when you’re using it, and the same for heating systems too. Many homeowners come to us suspecting that they have a critter in their air conditioning unit that they can’t find. The reason they can’t find it is because it isn’t there. The ductwork does smell pretty bad though, and it’s understandable how the confusion can happen.

The first thing we would recommend is to turn the air conditioning system off, leave it for half an hour to an hour, and then have a wander around your home. Can you smell the same odor? Does it seem to get stronger in one room? If you can answer yes to both, you’re getting closer to the carcass. It could be in the attic, in the wall cavities, in the air conditioning ductwork or heating system, under the floors, in crawl spaces, under your home, stuck in the chimney ... The list of places that these creatures find themselves in is endless.

Now, in some cases, it may be necessary for you to cut an actual piece of your wall out in order to get to the carcass beneath it. You will want to be very sure of the location before you do this. A lot of holes in a wall where you keep repeatedly getting it wrong is not going to make your other half very happy when they find out.

If you can’t work out where the smell is coming from, we do not advise that you start taking pipes or systems apart or cut holes in walls. We would advise that you seek the opinion of an expert.

Go back to the Dead Animal Removal page.