Dead Animal in Chimney or Fireplace

Critters love to live in chimneys, particularly squirrels and raccoons. Sometimes, unfortunately, they die in the chimney, due to a variety of causes. In some cases, they crawl down and are unable to crawl back up and out again. 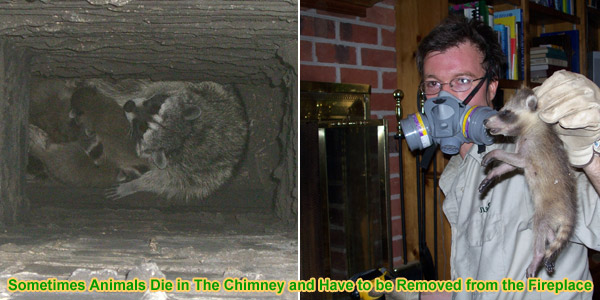 It's actually not common for animals to die in the chimney or fireplace, but it does happen, particularly with those slick metal chimney flues. If it's a brick flu, then the animals can always crawl out. Still, baby raccoons and squirrels are very common in chimneys, and babies have a high mortality rate. Or they may crawl through an open damper, and then the mother doesn't come down into the fireplace to get them, and they die in the fireplace area, sometimes behind a panel, if there is one. These cases are usually not too tough, but if a squirrel dies in between two metal tube flues, then it's game over. There's no way to access that area. You just have to wait for the animal to decompose and become a mummy, and the smell will go away. It takes a while. Put a fan in the fireplace and point it up. This is pretty much the only case in which it's impossible to get a dead animal, but at least those steel chimney flus are rare, and more common in the south.

Once I remove the dead animal(s), I mop up any bodily fluids and maggots, I remove any soiled insulation, and I spray down the area with a special enzyme-based cleaner that destroys biohazard waste. The removal of the dead carcass is 90% of the problem, of course, and if you let the house air out after that, (opening windows helps) the odor will be gone very quickly. If you don't remove the dead animal, the horrible stink will remain in your house until the animal completely decomposes and gets eaten by maggots, and the whole process will take a little more than a week with a small animal like a mouse or rat, and over a month with a big animal like a raccoon or opossum. I do recommend that you have the animal removed. The bad smell will go away within an hour. For more information about dead animal removal from various areas, read the below articles.

My name is David, and I am an expert on dead critter carcass extraction from homes and buildings. If you have a deceased animal in your house, I can remove it. If you don't live near me, click on my home page, and I have listed hundreds of wildlife removal companies who specialize in dead wildlife body removal, odor control, waste removal, and deodorization. Read more about Problems Caused by Nuisance Wildlife

Dead Animal Email Sent to Me: David, I have been perusing your site about dead animal and squirrel removal. We have been waging a four year battle with the critters in the chimney. I smiled at all of the things mentioned as we have tried most of them, and was surprised to find that we have likely been breaking the law in trapping and releasing them in other areas. (I will be looking up the codes shortly.) We have always done our best to remove them in the most humane means possible, but I am seriously considering training a falcon to start picking them off. Thanks for all of the information. We have recently had a new development that raised a question that I am hoping you can answer. The area of chimney that they have infiltrated is completely inaccessible through our fireplace. One of the beasts has seemingly kicked the proverbial bucket in this area of roof and the smell emitting is something to behold. The question that we have is will this decomposing rodent cause the others to vacate? Feel free to tell us that it will, even if it isn't true. We are holding onto this hope as a silver lining to putting up with the smell. Thanks in advance. Best, Dylan and Amanda

My response: In my experience, a dead animal will not cause others to move out. Have you found that to be the case?

Animals can find their way into all manner of different cavities and spaces around the home, and whether they have been poisoned and are already dying, or they can't get out and die in the cavity, they can cause a nuisance for the home owner. The chimney is another area where this can happen, and while birds are often the most common animal to find dead in a chimney, there are plenty of other animals that can also die in such a cavity.

The first thing to note is that although the animal is dead, you shouldn't be complacent, as it still may be carrying ticks, fleas or other parasites that can transmit diseases, so make sure that you handle the carcass with gloves. This should be placed in a seal-able plastic container or double bagged with thick garbage bags. It can then be incinerated or disposed of in the trash.

Identifying The Source Of The Animal

In most cases it will be quite obvious that the animal has either climbed up the chimney, or flown in to the top of the chimney. However, if it is a species that naturally gets into wall cavities like a mouse, then it may be worth having your chimney sweep use a camera to examine the lining of the chimney to see if there are any holes or gaps that an animal could have used.

Preventing animals from getting into the top of the chimney will usually be the biggest problem to face, but replacing a damaged chimney cap, or installing one if it isn't already in place will really solve that problem. It is also worth making sure that the lining of the chimney is intact, and any such holes are repaired, while making sure other areas of the property are also free of pest animals is work that is also worth carrying out.