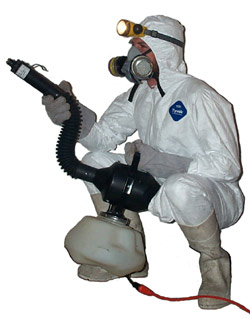 Attic Restoration: If wildlife has inhabited the attic of your home or building, attic restoration is an important part of a complete wildlife control solution. Attic restoration basically means restoring your attic to the good, clean condition it was in before wildlife decided to move in and make a mess of things. Animals in attics can cause the following problems:

So it's important to address these problems by cleaning, decontaminating, and restoring the attic to its original state. This is done through several steps.  The proper training and equipment is required, such as a HEPA filter mask and biohazard suit, as seen to the right.

Attic restoration can be quick and cheap, or intensive and expensive, depending on the amount that needs to be cleaned.  Homeowner's insurance may cover the cost. 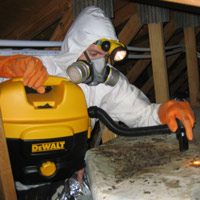 Step 1: Vacuum the Droppings: The droppings of smaller animals, such as rats, mice, squirrels, birds, and bats cannot be efficiently or even realistically removed by hand.  These droppings are usually in the form of thousands of small pellets spread throughout the attic, on or in the insulation, and on many surfaces, such as this duct seen in the photograph to the left.  These droppings must be vacuumed out with a filter vacuum.

If the droppings are spread throughout the insulation in high concentration, that insulation should be removed and replaced.  In such a case, a huge high-powered insulation vacuum device, with a giant hose running outside, is best.  But for many cases of lighter infestation, a smaller vacuum will do the job. 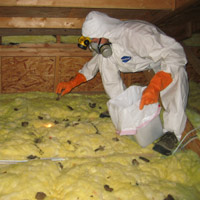 Step 2: Removal of Large Animal Droppings: The large droppings and other debris left behind by the animals must be removed by hand, because a vacuum is not powerful enough to remove these larger items.  Bigger critters, such as raccoons and opossums, leave very large droppings throughout the attic, such as in this photo of possum poop seen to the right.  It's important, when handling any wild animal feces, to properly protect yourself against infectious disease by wearing the proper safety equipment, such as rubber gloves, biohazard suit, and HEPA filter mask, to avoid breathing in airborne pathogens, such as raccoon roundworm eggs, which can be inhaled and infect humans.

Nesting material should also be removed - squirrels, raccoons, and other animals can bring in sticks and leaves and other nesting material, which are often full of parasites. 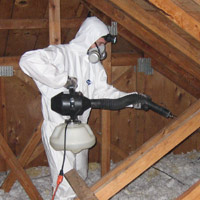 Step 3: Attic Fogging: This is probably the most important step.  Although a great effort is made to remove as much of the waste as possible, a great deal is left behind.  Not just waste, but oils and grease from the animal's fur, pheromone attractants left behind, parasites such as fleas and ticks, and urine that has dried out.  Plus the mold that grows on areas of waste.

The attic is fogged via a special electric-powered atomizing mist machine, which dispenses the special enzyme-based biohazard cleaner.  This special cleaner destroys organic matter specifically, without affecting the structure. It kills the pathogens and breaks down urine, grease, and animal poop, effectively "digesting" it with time.  It renders the waste inert, and importantly, eliminates the pheromone odor left behind by the animals.  It's very important to get rid of the animal smell, because the scent of animals living in an area can attract new animals of the same kind, or even predator animals.

Some companies offer full-blown restoration via the complete removal of all insulation in the attic, and replacement with new insulation. This requires special attic restoration and re-insulation equipment. In cases of extreme damage or soilage, complete insulation replacement might be a good idea. And it's often covered by homeowner's insurance. To read more about the process, please click my Attic Insulation Replacement page.

I have compiled various photographs of wildlife excrement, in case you need to perform identification. Click these pages to learn more about: rat poop, squirrel poop, possum poop, raccoon poop, bat guano. If you need attic restoration in your hometown, click my Directory of Thousands of Wildlife And Attic Restoration Companies.

How Should You Clean Wild Animal Waste in Your Attic?

If you think that cleaning wild animal waste from your attic is going to be a quick and easy task, you’re very much mistaken. It is highly advisable that you call in the professionals to remove animal waste, whether that’s urine stains and patches, feces, animal carcasses, nesting material, and more. Not only will you need a vast quantity of tools and pieces of equipment to ensure the job is done properly, but you will also need to make sure that you're protecting yourself, your family, and your pets at the same time. You’d be surprised by exactly how dangerous animals can be, even when they aren't present.

Bats are very problematic in terms of wild animal waste. They do cause considerable damage to properties, usually be entering via the roof or chimney, and then setting up roosting sites. These flying mammals are protected across the United States, so killing them or harming them in any way is NOT an option. Cleaning up after them as you would clean up after your dog has made a mess is NOT an option either.

The building damage is obviously a very big concern with bats, but it's not the biggest concern. Bat guano, known as bat feces to most people, is incredibly dangerous. The makeup of the guano makes it rather corrosive and that, in turn, makes it bad for the actual structure of your home. Ceilings can collapse as a result of the corrosive guano, and it can and has had a very detrimental effect to the state of buildings, residential and commercial alike.

As well as causing problems with your actual home -- the building — guano from bats can also come with very serious health concerns. Bat feces can carry certain strains of Histoplasmosis, and this is a disease can primarily effects the lungs of humans. In certain situations, such as when the patient already has an existing condition that affects the lungs or immune system, these strains of Histoplasmosis can be deadly.

With bat guano, you can't just sweep it up, wipe it down, and hope the problem has gone away. To start with, you can't sweep the bat guano up at all. When you do this, you are sending those dusty spores airborne, and the strains of Histoplasmosis with it. This can then be inhaled by humans and other animals, wreaking havoc on the human body. It is not a disease that many people would think of when someone starts to display flu-like symptoms, just one of the things that makes it so dangerous.

The dust, if it has been walked into the house, can spread the disease around very quickly. When dealing with bat guano, rather than sweeping it around and sending it airborne, you should use a filter vacuum cleaner.

Bats are just one animal whose waste causes a serious problem. Rats are similar, with urine and feces that can carry diseases such as salmonellosis, but they also send signals to other rats in their urine too. Pheromones are left behind, signaling to others that there is food close by, a source of shelter, or some running and fresh water. When rats turn up, they breed very quickly. The new rats within the colon will also spread disease and leave pheromones all around the place, and it’s not very long before you have half of the city’s rat population living in your home. Rats are food for a whole bunch of other animals too, including snakes, raccoons, coyotes, owls, eagles, and more. When you have a large rat or mouse problem on your hands, you have what is essentially a five star restaurant for other predators. That one rat problem soon turns into a rat problem of thousands, and also a snake and other animal problem too.

The waste of wild animals is so much more powerful then you'd think. It has the potential to attract hundreds and thousands more of the species, and spread a wide range of diseases, many of which you probably won't have heard of. This is why we recommend that you call upon a professional to help resolve your wild animal control and waste problem. This is not the kind of job you’ll want to take your chances on.