Opossum in the House

Need possum removal in your hometown? We service over 500 USA locations! Click here to hire us in your town and check prices - updated for year 2020.

If the opossum has gotten in your house, like in your living room or bathroom, don't panic. They will not attack. They often bare their many teeth as a threat display, but they don't really lunge and bite - in fact, they're as likely to "play possum" (play dead). Still, you want the animal out of the house.

You have three main options for getting an opossum out of the house:
1 - Use a tool, such as a snare pole as seen below, to grab the animal and bring it outside, or in a trap.
2 - Grab the animal by the tail. This is easy for me, but if you're afraid and don't want to, I understand.
3 - Open all the doors and wait for it to walk out, or usher it along with a push broom. 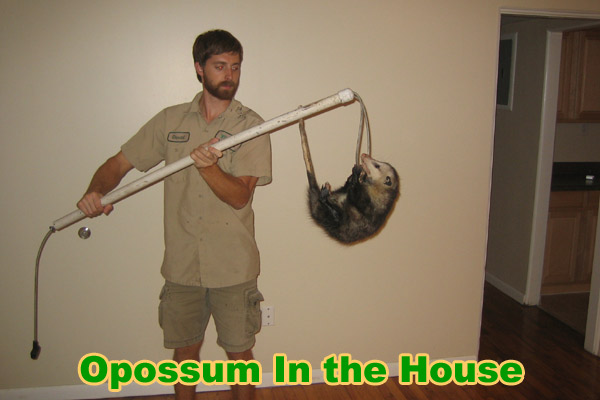 Opossum in the house.

But what if the opossum isn't one loose in the house, but one somewhere in the architecture? Well then, please check out my following guides. If you have an opossum in your ceiling or attic, click on my: guide to opossums in the attic, which will give you strategies and advice for dealing with that situation. Trapping and exclusion are required, since you're unable to just open the door and push it out (for one, you probably won't be able to find it, for two it's hard to move around in the attic, and three, it WANTS to be living there and will return if you get it out, so you must relocate it and seal the hole shut). The same goes for cases of: guide to possum in the wall, or - guide to possum in basement. I've written some good trapping guides, if you click the links below. Of course, in many cases, only a wildlife removal company can really do a good job.

I often deal with cases of opossums living under people's sheds or decks. This provides the perfect opportunity to offer the customer an exclusion barrier. The opossum doesn't really get down in the dirt and dig the way a groundhog or armadillo does, so in theory, the barrier doesn't have to go very deep into the ground. I usually stick to my standard depth of 8-12 inches just to make sure that I've covered these animals as well.

You may want to read some of my other opossum articles: possum removal - photos of possum poop - types of possum problems - possum trapping - how to catch a possum - pest control of possums - possum repellent - types of possum damage - what will attract an opossum? - best bait to trap an opossum - should you handle an opossum with bare hands? - how can an opossum damage your house? - best ways to get rid of opossums - are opossums good pets? - do animal services or the city help with opossum issues? - why opossums play dead - should you ever poison an opossum? - tips to find and remove a dead opossum - what are the symptoms of a sick opossum? - how do wildlife rehabilitators take care of opossums?.

Over the years, I've heard all sorts steam being blown about how dumb opossums are. I'm not an expert in the field of animal intelligence, but I definitely have respect for any animal that can survive in the wild, and sometimes opossums can surprise me. Consider the case of one particular baby opossum which I caught last spring. It had crawled into a home through a gap next to a water pipe leading into the bathroom, and it scared the homeowner to death. I eventually found it in the recesses of a living room couch. I put it in a squirrel cage, transferred it to the bed of my truck, and returned to the homeowner to collect payment. When I went back to the truck, I saw that the trap was empty. Still closed and secure, as I was certain it had been when I first placed it in the truck, but empty. My bed has a cap, so I knew that the opossum must have still been somewhere amongst my equipment, unless it played Houdini once again, and escaped the truck itself. I figured that it must have, because I could not find it. I returned home, and began a more thorough search for the little critter, and just when I thought I had searched every possible nook and cranny, I found it balled up in the absolute bottom of a crowded tool bucket. I lifted it out (by the tail), placed it on the bed of the truck, and took just a second to replace the tools in the bucket. In that second, this little bugger managed to scurry to the back of the truck, up the side and over the tailgate, and make a flying leap of at least four feet out into the street, where it promptly ran off and escaped. I marveled at the resilience and cunning of this creature, who was no bigger than a rat and no more than a few months of age - most of that time spent clinging to its mom.

Opossum Situation: Hi David: Just wanted to compliment you on the great information on your website! I've got an issue with opossums in our house, and I learned quite a bit reading all the details on your site before I called an expert in our area (Los Angeles). They'll come out to inspect today, so hopefully we'll have the problem solved quickly. Keep up the good work. I’m having a problem with a opossum crapping in my house and I want to get rid of it. I would like some info on how much it is to hired your company to do this. I live in Hollywood fl. Please email me back on how, when and how much it would cost to do this. Thanks, Shaz

My Response: Is it living somewhere inside the house, or in the attic or walls or basement or something? If it's inside the house proper, you of course want it out immediately! I live in Florida, but my directory should have someone good in your area.

Opossum Situation: Good morning David, We have found a opossum in the house and we believe it has been there for approximately 2 weeks due to the noise we have heard. Can you please tell me how much it would cost to have it removed. We only see a few droppings so I don’t be believe it has had babies but not sure. Thanks

My Response: Costs vary by company. I live in Florida, but my directory should have someone good in your area.

Article topics include: Possum in the House - How to Get an Opossum out of the Home - how do you get possums out of the house - remove a possum from my house

What to do if an opossum gets in your house

While it is not common to have an opossum inside your living space, it is also not impossible to find one there. It may have missed its way or just wandered in through an open door/window while searching for food. In the event that an opossum does get into your living room, bedroom or kitchen, then your first priority is to get it out quickly enough.

It is important not to panic as many are wont to do on sighting the furry critter. Opossums are harmless creatures and ordinarily would not attack or bite a human, even though they bare their large teeth as though to bite when they feel cornered.

If it would help, calmly close the door of wherever the opossum was sighted and give yourself some time to think about what to do. If it entered in through an open window, you may be lucky that it would go back outside by itself, but this is not very likely.

Here are your options:

If you are unable to get the critter out by any of these methods, you should get help from animal control experts in your area.

It is important, after the opossum is removed, to locate its entry point and take precautions so the incident is not repeated thereafter. The room should also be decontaminated because some of them are laden with parasites.

Go back to the Opossum Removal page.