Need muskrat removal in your hometown? We service over 500 USA locations! Click here to hire us in your town and check prices - updated for year 2020. 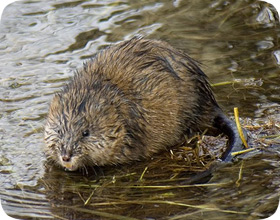 How to Get Rid of Muskrats - Muskrats like to live near the water, so if you’re high and dry on the plains somewhere, you probably don’t need to worry about these interesting creatures. The concern surrounding muskrats isn’t necessarily on a personal level for most people. If you have a decorative pond or a flood wall protecting your home, then maybe you have reason to be concerned. Most muskrat problems are the worry of town and city officials, people dedicated to proper upkeep of city dikes and flood zones. Muskrats like to burrow into embankments in addition to creating lodges similar to beavers. This tunnel network can quickly compromise the integrity of a load bearing, water barricade. Of a lesser concern, muskrats will leave their watery homes to feed on cash crops in rural settings.

When it comes to getting rid of muskrats, there are a handful of methods for removal, some questionable and some reliable. Of questionable methods, food source interruption has to be top on the list. It is true that eliminating the cattails, water lilies and aquatic vegetation that muskrats feed on will put a dent in their otherwise content lives; however, it is not always ethical or legal to destroy an entire eco system for the sake of singular pest removal. The amount of life that exists on a muskrat pond is far more extensive than just the muskrats and plants. Birds, fish, reptiles, amphibians, and mammals of all shapes and sizes rely on water habitats for food. It is generally not recommended to try to get rid of muskrats by eliminating the plant life. Decorative ponds or water bodies that are not subject to the natural course of life can be maintained with plant quality control. Fencing is an option for any size area, though closing off areas of swamps and ponds in an urban setting can be an expensive endeavor.

Another tactic on the not-so-good list is attempting to poison muskrats. There is no approved muskrat poison on the market, and people have often tried other animal poisons as a result. Poisoning a muskrat is not a good idea. Keep in mind that poisoning a wild animal may affect other animals along the food chain, and cause more damage than you may be aware of. The last thing town officials want are handfuls of poisoned muskrats floating in the water supply.

As with most moderately sized nuisance animals, the best method of control is trapping and removal. Muskrats can be trapped with live traps and relocated at least one mile away. They can also be effectively trapped with lethal, body gripping traps. Lethal traps are very effective and can be less time consuming than live trapping. Similar to trapping beavers, body gripping traps are placed in runways around the body of water. These passages will look like well-travelled runs, and they should have no more than a few inches of water in them. Any pathways in deeper water offer muskrats a chance of swimming over the trap without getting caught. You can also venture out onto the ice during winter to place traps inside the muskrat lodge. By gently removing the top part of the structure, you can place the body gripping trap inside the main chamber. You must be sure to replace the material back as tightly as possible to prevent the lodge temperature from dropping, forcing the muskrats to build another for adequate warmth. If the ice around the lodge is clear, you can see muskrat roadways beneath, characterized by trails of stirred-up, muddy water. Chip away the ice in these locations and set your trap.

Cage traps are a little more difficult to set up due to their bulky size and shape. If you are determined to use a cage trap, one recommended method is to secure it to a board and push the board and baited trap into the water. The muskrat will have no choice but to use the board to access the bait inside the cage, and this will eliminate the chance of the animal avoiding the device altogether.

The North American Muskrat is a semi-aquatic rodent that lives in West and South West of the United States and in the Northern part of Mexico. There are other types of muskrat species that can be found in the Southern part of the United States and the muskrat has now been introduced into areas in Europe and in Asia. The muskrat looks very similar to a mix between a rat and a beaver. The muskrat has a shiny brown top and undercoat that is great for insulation during the colder winter months. It has a flat tail and webbed toes to make it easier to swim in the water. However, unlike a beaver, the muskrat is fairly small. It only grows up to a foot long, has a maximum height of about 6 inches and only weighs 3 pounds.

The muskrat lives on land and on water. It can make a burrow that is made on top of the water with an entrance that is beneath the burrow, but these are not part of a dam system. Muskrats will also make their huts out of reeds on marshy banks or burrow into the mud of the actual bank. Muskrats have the amazing ability to hold their breath for up to 15 minutes underwater, but do not like to build their burrows near places where the water level changes drastically. This makes the banks of ponds, small lakes, marshes, swamps and rivers especially likely home for the muskrat.

The muskrat is an omnivore, but primarily eats vegetation. They prefer to eat plants that are found around their aquatic burrows but will venture out to find other types of plants; like the ones in your garden. Farmers and gardeners do not particularly care for muskrats and they can severely damage food crops in a relatively short amount of time. They do this by destroying the roots of the plant. If vegetation and fruits are scarce, like in the winter, muskrats have been known to eat other animals such as fish, insects and smaller rodents also.

While muskrats do not actively hunt other animals, many animals hunt them. The muskrat’s chief enemy is the mink but it has many other enemies also. Some of the main predators that will hunt muskrats include coyotes, alligators, otters, raccoons, owls and snakes. Humans also seek out the muskrat because of its valuable fur that is made into women’s coats and its scent glands that are put into perfumes. This is where it gets its name the Musk-rat as its scent glands are made into musk perfumes. Because of the high amount of predation that the muskrat must face, it rarely lives longer than two years. However, in highly secure areas that have lots of food available and not very many predators, the muskrat can live up to eight years.

The muskrat’s breeding season lasts from late spring to early summer and following a month of gestation, the female muskrat will give birth to a litter of two to six young. Muskrats become weaned from their mother in about a month to a month and a half and will become sexually mature in six to seven months. In the warmer regions, female muskrats can have two to three litters per year, and in the colder regions they will have one or two litters which make them very fast reproducers. It is this reason that when the muskrat was first introduced into Eurasia that the very quickly became an invasive species. Muskrats are seen as pests and are exterminated regularly, but because they reproduce so fast it is very hard to control their populations.

For info on another, larger aquatic rodent, read about how to get rid of nutria.

How to Get Rid of Muskrats in a Pond
Muskrats often coincide with beavers, though muskrats require much less space to create their lodges and burrows. Muskrats can cause serious damage to pond dikes and can eat a large number of fish and aquatic life in a short amount of time. To get rid of a muskrat in the pond, trapping and removal is the most effective means. Muskrats can be trapped in live traps, but there is some degree of difficulty with this due to the lack of time muskrats spend on dry land. If you wish to use a cage trap, push it into the water secured to the top of a board. Be sure to tether the board or you will not have a way to retrieve a captured animal. Lethal traps are the most common means of muskrat control. The traps are placed in water-filled runs and around the lodge itself. Some traps can be set into the water in the well-travelled tracks left by the muskrats through the mud.

How to Get Rid of Muskrats Outside
Muskrats can be destructive creatures, eating fish and vegetation, burrowing into the banks of ponds and private bodies of water. To get rid of problem muskrats, some people prefer to clean out their pond completely, leaving no aquatic life for the muskrat to feed on. Food removal can be a successful means of muskrat elimination, however, wiping out an entire ecosystem just to be rid of a nuisance animal is not recommended. Lethal trapping is the most popular means of control for muskrats. Body gripping traps or drowning snares are placed along the packed-down pathways around a muskrat habitat. Some people prefer to trap the animals in the winter when ice cover allows the lodge to be approached. If you can get to the lodge with minimal trouble, the top can be removed and you can set your trap directly in the main compartment. Setting traps near the lodge can be just as effective and does not require spending hours outside in cold weather.

How to Get Rid of Muskrats in the Winter
Winter is a good time to trap muskrats because the animals are still active despite the freezing temperatures. Ice coverage on a pond inhabited with nuisance muskrats allows the trapper to get close enough to the lodge on foot to remove a portion of the roof. A lethal trap can then be placed inside the main burrow. Ice also allows the trapper to walk the perimeter of the pond to scout for muskrat pathways. These pathways are visible through the ice and will provide a good area to place a trap. By chipping away the ice over these paths, traps can be set with a good chance of muskrat capture. The ice limits this nuisance animal’s ability to come to the surface and investigate. The muskrat will rely on the established passages through the mud and vegetation to get it to where it is going. Be careful when setting traps to make sure the water is not too deep. If more than a few inches is present in the passage a muskrat may swim over the trap without getting caught.