How to Get Rid of Muscovy Ducks

Need duck removal in your hometown? We service over 500 USA locations! Click here to hire us in your town and check prices - updated for year 2020. 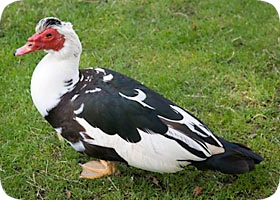 Muscovy Ducks are usually classified as a pest species due to their aggressive nature, their droppings, and their tendency to destroy lawns. The most common complaints include the following:

For these reasons, many people wish to have nuisance Muscovy Duck trapped and removed.

Below is my advice for getting rid of a Muscovy Duck problem. However, if it proves ineffective in your case, you have the option to hire a professional muscovy duck removal company, of which I have dozens listed on my website, in your area to take care of the problem. If you live in the Boca Raton, Ft. Lauderdale area I recommend that you call Wildlife Removal Services Inc. of southeast Florida for Muscovy Duck removal: 954-372-1195 or 561-826-6475. You may also email me with any questions you have. 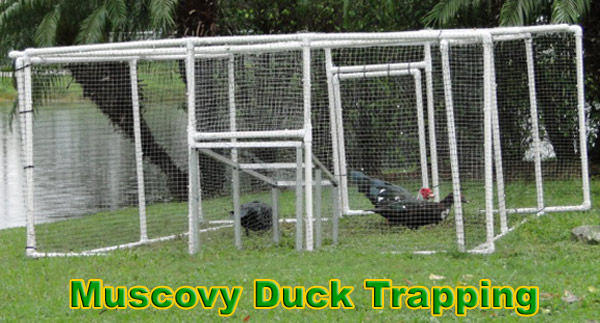 When one thinks of nuisance flocks of birds, the first species that come to mind are usually pigeons and geese. Ducks are generally not high on the list—that is, unless they are Muscovy ducks. Muscovy ducks, originally a food animal, are native to South American and Texas, but thrive in locations such as Florida, and are easily characterized by the irregular, red skin on their face as well as the strange hissing noise they make. Because this bird is found in places outside of its home state, it is considered an invasive pest. Animals like the Muscovy duck, that take over habitats, can stress the natural ecosystems and even eradicate native plants and animals.

These birds will nest almost anywhere, including abandoned nests from other birds, under shrubs, under porches, on balconies, and have been known to set up shop in attics. Their diet consists of crops, water plants, insects, and crustaceans. Moscovy ducks are leery of other animals, and because of this they are rather aggressive. The birds live alone or in small groups, and will defend their territory without hesitation.

Muscovy ducks are considered nuisance birds because they are destructive to gardens, nest in any available spot around a home, and leave droppings anywhere they have travelled which includes swimming pools. Bird waste can be caustic and can raise the concern for diseases such as salmonella and E.coli.

Patrick of Wildlife Removal Services, Inc. has perfected means of removing Muscovy Ducks. He operates throughout Southeast Florida, including Fort Lauderdale, Boca Raton, and Miami. He has studied and worked with these ducks for a long time, and has devised a means of trapping the entire group of birds, and removing them from the area. If you need professional Muscovy Duck removal in Florida or elsewhere, give Patrick a call. 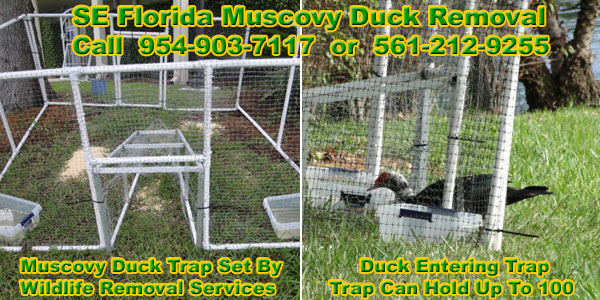 Because certain federal laws protect migratory birds, the opportunities for dealing with Muscovy ducks have been narrowed down to a few viable options. The most effective way to decrease the muscovy population is to render the eggs sterile after they have been laid in the nest. These ducks can lay eggs all year long, and can lay as many as two dozen at a time. Each clutch will take approximately thirty five days to complete gestation. You should not remove the eggs, as the hen will just lay another batch. By shaking the eggs vigorously and then replacing them where you found them, it will take the hen a few days to know the eggs are not viable. At this stage, you can remove the eggs completely and throw them away in your garbage can. The female duck will eventually lay another clutch, but with due diligence, the population can be kept under control. It is not recommended that you break the eggs while inside of the nest. There is no way of discerning how old the eggs are, and breaking them open could leave you disturbed at what you might see. Breaking open the eggs may even leave you with live hatchlings, so the practice is generally advised against.

In areas where egg removal is not practical, the ducks can be trapped and subsequently relocated, though many state laws and regulations forbid the relocation of Muscovy ducks. Humane euthanasia is often employed in areas where the ducks are out of control and cannot be moved to another location. Home remedies such as predator urine are widely unsuccessful, as ducks have a limited sense of smell and rely mostly on sight and sound to warn them of danger. Similarly, harassment techniques often fail. Harassing the birds with light, sound, or a large dog, will only keep them away for a short while. Once the offending element is gone, the ducks will come right back.

Home and business owners have reported marginal success with the process mentioned above, called “egg addling”; however, if you have tried removing muscovy eggs, and have tried a variety of home remedies, but are still faced with an overwhelming duck issue, it may be advisable to call a local wildlife removal company.