Need chipmunk removal in your hometown? We service over 500 USA locations! Click here to hire us in your town and check prices - updated for year 2020. 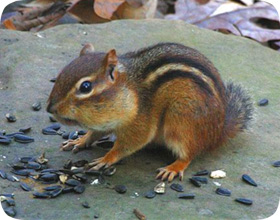 Chipmunks are usually classified as a pest species due to their digging and burrowing habits, particularly around houses and landscaping. The most common complaints include the following:

For these reasons, many people wish to have nuisance chipmunk trapped and removed.

How to Get Rid of Chipmunks - Unlike rats and mice, chipmunks aren’t usually in-home nuisances; that’s not to say they won’t occasionally invade attics and crawl spaces. The reason you rarely see chipmunks in your home is because they are burrowers, and are often chased away by other animals like squirrels and rats. Their diminutive size makes chipmunks easy targets for their bigger, bullying cousins. The most common nuisance issue has to do with the damage caused by burrowing chipmunks outside of the home. These burrows are often difficult to spot. Chipmunks carry the loose dirt from tunneling inside of their cheek pouches. By removing the loose soil, the entries to chipmunk holes become invisible against the ground. If built under a patio or step, a tunnel can cause the above structure to crack or become unstable. Aside from the issues caused by burrowing, chipmunks are notorious garden raiders with an occasional inclination toward bird seed.

To get rid of chipmunks, you need to think like a chipmunk—at least initially. Survey your yard. What are the areas which lure these rodents to your property? If you live near a wooded area, the chance of getting rid of chipmunks altogether is slim. In forested regions, your best bet is to defend against the little creatures that lurk on the outskirts of your yard. Keep your property well maintained. Clean up any piles of debris. Chipmunks like to burrow, and if they can burrow under cover they will be that much happier. Once your property is free of unnecessary clutter, you should take the time needed and seal up any cracks or holes along foundations that might entice a chipmunk intruder. Gardens are also a huge draw for these animals. Chipmunks will raid a garden before a bird feeder, though they won’t pass up the opportunity to steal from the birds.

Because trapping and removal of chipmunks can be a tedious task, most homeowners opt to try scare tactics prior to catch and removal. The most common method of chipmunk removal has to be mothballs. The use of this highly toxic chemical is as varied as the people trying it. Some people say to hide it in socks around the yard. Other people say to sprinkle the small spheres around the perimeter of lawns and gardens. No matter how and where you decide to do this, it is likely that you will meet with the same results—absolutely no change in your chipmunk issue. Mothballs and other scent deterrents like fox urine will not cast chipmunks out of your yard. The little beasties will just avoid any chemicals that irritate them, and neither is potent enough outside to provide any kind of invisible barrier. If you skipped over the chemical restraints and went right to the owl decoy, you probably weren’t any more successful in getting rid of chipmunks than you would have been with the mothballs. Owl and other predator statues are fakes. Just as we know they aren’t real, chipmunks know they aren’t real, too. 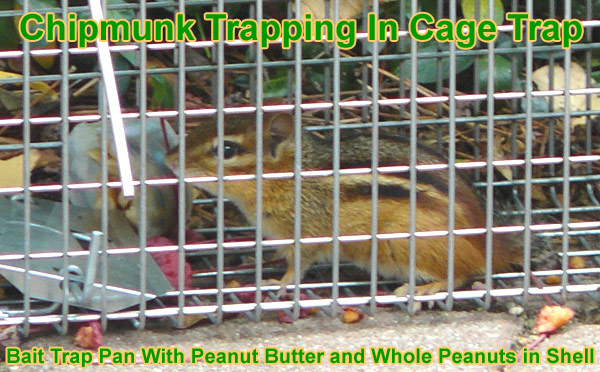 When discouraging chipmunks hasn’t worked, it’s time to consider trapping them. Humane trapping and relocating is most effective when you are only dealing with one or two chipmunks. It is a very time consuming task to live trap a forest full of little rodents and relocate them far enough away so that they don’t return. If you choose to live trap, a wire mesh trap with a pressure plate trigger will be the most effective tool to use. Chipmunks are very food-driven. You will not have to leave the trap pre-baited for a few days as with some other animals. Just bait and set, and the next day you will likely have a catch.

Lethal traps include large snap traps, body gripping traps, and “zapper” traps, which send a lethal current of electricity through the chipmunk once it enters the container. Lethal trapping is advised in areas of high chipmunk populations, though it is important to remember that you will be hard pressed to completely eliminate chipmunks from your property. General exclusion methods for prevention are the most effective, keeping the number of chipmunks in the yard at a minimum. If you have a true rodent infestation, it is still a better idea to use a program of vigilant trapping instead of poison.

Chipmunks are adorable and very small animals that are related to the squirrel. Chipmunks are found all over the North American continent and in some parts of Asia. Chipmunks are most readily recognized by their big puffy cheeks and coloring. The coat color of a chipmunk will vary greatly depending on the species. It can be reddish-brown with darker stripes that start on the sides of the head and end at the tail, or its coat can be multi-colored with alternating black and white stripes. The chipmunk is one of the smallest rodents, rarely getting bigger than 8 inches long or weighing more than 2 ounces.

Chipmunks can live in nearly any environment from mountains to deserts. As long as there are shrubs and minimal food sources, a chipmunk can survive. However, they prefer environments that offer a lot of undergrowth such as forests or valleys to protect them from predators. Chipmunks build their homes in a variety of different places from burrows with tunnels and dens to building a nest in a hollow tree or a log. The natural predators for chipmunks include snakes, owls, hawks, weasels, raccoons, foxes and dogs. However, even with this long list of predators, the average life expectancy for these little critters is 3 years.

Chipmunks are omnivores which make it possible for them to survive in a variety of different areas. The main sources of food for chipmunks are grains, nuts, fruits, insects and berries. When eating, the chipmunk will stand on its hind legs and grid its food down to manageable bites. Chipmunks, like any other squirrel, are food hoarders. They will stash the food they find in their enormous cheeks until they can make it back to their den where they will hoard the food in a food chamber. This cache of food is very important to the chipmunks’ survival during the winter because they hibernate, but unlike other animals they do not have any fat to sustain them so they must eat periodically from their cache during the hibernation.

Chipmunks do not like to be around each other; in fact the only time that chipmunks interact is during mating season. During the mating season, a female chipmunk will give a shrill, chirping sound that attracts the male chipmunks. Males will also put on a loud and extravagant show to impress the lady chipmunks. The male during breeding season will chatter loudly and make gesturing with his bushy tail. Ironically, these gestures are the same to issue warnings of danger to other chipmunks or the signal that they are about to fight each other.

The male chipmunk will stay close to the female during the thirty day gestation period and during the first few weeks of the young’s life. The usual litter size is 2-8 young and the young will stay close to the den to learn all the necessary life skills before leaving to make dens of their own. Chipmunks will sexually mature very early and the overall population of chipmunks can explode as easily as it can decline.

As of right now, chipmunks are not in any danger of becoming extinct, even though some populations where having a chipmunk population is highly undesirable may be on the decline. Usually chipmunks and humans will get along just fine, but chipmunks do carry diseases that they can pass on to other animals and they can destroy a vegetable garden in no time. Read the full guide Chipmunks.