Need goose removal in your hometown? We service over 500 USA locations! Click here to hire us in your town and check prices - updated for year 2020. 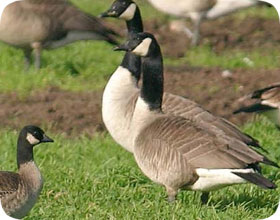 Canada Geese are usually classified as a pest species due to their habit of ripping apart lawns and landscaping, and worse, leaving behind large amounts of very big droppings. The most common complaints include the following:

For these reasons, many people wish to have nuisance Canada Goose trapped, removed, or driven away from the area.

Removal of Canada Geese - People who don’t have the deal with the nuisance aspect of geese usually like the large birds. People who are a party to the true nature of these animals often want them gone from their properties as soon as possible. A pair of geese on a lake is rarely a cause for concern; however, just two geese on a small pond can wreak havoc on the surrounding vegetation and landscape. Not only do Canada geese eat large amounts of important grasses, they are incredibly messy, expelling waste wherever they travel. Unlike mammals, birds eliminate both solid and liquid waste from the same place on the body. This wet, soppy mixture contains harmful fungus and bacteria. Left unattended, flocks of geese can ruin water supplies and cause serious human health concerns.

The trouble with Canada geese is that they usually return to the same locations annually. It is very difficult to trap and relocate them; they will just return again. The best way to get rid of Canada geese is to make them want to leave on their own. This is no easy task. Geese are protected under a migratory bird law, and you are limited in what you can do to remove them from your property. You cannot kill a Canada goose. This means you cannot shoot one, poison one, lethally trap one, or bludgeon one to death (heaven forbid!). Even if you could get close enough to harass one, they are incredibly aggressive and protective birds, and they would likely retaliate. Harassment techniques are allowed, and they can range anywhere from sound cannons to barking dogs. This type of harassment does work—if only for a little while. Birds exposed to sound cannons will fly off, but they will eventually return. The problem with mechanical sound makers is that the geese get use to them, rendering them totally ineffectual. Dogs can be a huge help, but a dog can only be outside and harassing geese for a certain amount of time. Once the dog leaves, the geese will return.

Ideally, eliminating the food source of Canada geese will help discourage them from landing where they become nuisances. People should avoid offering bread crumbs and French fries. The more geese become accustomed to living near humans, the less likely they will be to want to leave populated areas. Sometimes it’s not possible to eliminate a food source completely. Geese like certain grasses and algae. It is not always practical or recommended to kill off a plant vital to other ecosystems.

If you can’t discourage geese from living on your property, the only other option you have is to try trapping and relocation. Because of the protected nature of migratory birds, be sure your local law allows non-professionals to dabble in this type of trapping. During the bird’s flightless season, nets can be used to capture the geese. Once you have them, you need to know how to handle them and get them to their relocation site. Keep in mind that geese are notoriously aggressive. Know how to properly handle a bird before you load it into your truck for transport. More importantly, have a plan of attack. If you’re dealing with a flock of geese, are you going to net them one at a time or all at once?

The distance of the relocation site from your property is a moot point. Geese that are partial to an area will return there regardless of the distance. To prevent the flock from returning, be especially certain to pick a spot with a large amount of food, shelter, and low number of obvious predators. Many other wild animals feed on goose eggs, so a protected area on a rich body of water would be ideal.

In reality, getting rid of geese is not something the average property owner should take on by themselves. The laws surrounding Canada geese make control difficult, and the animal’s tenacious behavior makes the allowed path of recourse challenging. This is one situation where you should seriously consider hiring a professional.

I also have some more information about tactics such as dog harassment and egg addling on my how to get rid of Canadian Geese page.

The Canada goose is a species of goose that is specific to North America. They have evolved to thrive in the fluctuating temperatures of bitter cold to sweltering heat of the United States and Canada. The largest concentration of the Canada Goose is in the Lakes region in the Northern United States. The Canada Goose has made it to the westernmost parts of Europe, but do not do as well as they do in their original habitat. The Canada Goose is described as having a black head and neck while the rest of the body is a light grey color but can also have brown and white hues in its plumage. This goose also has black legs with the webbing found on any semi-aquatic animal. The Canada Goose is a larger bird that can weigh up to 18 pounds, but averages at 7-14 pounds.

The Canada Goose is a permanent fixture anywhere there is a stable body of water. These geese will live anywhere there is water such as man-made lakes, reservoirs, streams, lakes or wetlands. Canada Geese make their nests out of plants and layers of fallen off feathers and place them near the water, but elevated so if there were to be a flood the nest will not be damaged. The Canada Goose has grown particularly fond of urban environments because the waterways are maintained and clean (usually) and there is always a group of people wanting to throw food at them.

Canada Geese are considered omnivores and will eat different foods at different times of the year. This is how they have adapted so well to living in urban environments. The major stable of the Canada Geese’s diet is grasses that are found around the water they reside. However, the Canada Goose favors grains of all types such as wheat, rice, corns, beans and seeds. Geese have also been known to eat insects and small fish that happen to swim by in the water. There is a problem with the Canada Goose eating garbage that it finds which is extremely damaging to its digestive tract or they could die from choking on the paper and plastic. You should never feed them anything other than grains.

Canada Geese are monogamous and they mate for life. The female goose will lay anywhere between 4-8 eggs per year, and both her and the male will sit in the nest at all times to ensure the safety of their young until they hatch. The normal incubation period for the eggs is a little less than a month and the eggs are in grave danger of being stolen during that time. The major predators of Canada Geese eggs are foxes, coyotes, larger birds, bears and raccoons.

After the young are hatched they are still in danger from predators and therefore must stay next to the parent geese for 8 weeks. Canada Geese do not become sexually mature until the second year after they are born. The average life expectancy for a Canada Goose is well over 15 years due to the lack of natural predators after they reach adulthood.

Canada Geese are very hostile towards any perceived threat whether that is a predator, an unfamiliar goose or a human. A goose will show its annoyance with a hiss and flapping its wings and if it really provoked it will bite you. Canada Geese are more hostile when they have new fledglings to protect. These geese are a familiar site in rural and urban areas and provide a good excuse to go to the park and sit by the lake for the afternoon.