Need beaver removal in your hometown? We service over 500 USA locations! Click here to hire us in your town and check prices - updated for year 2020. 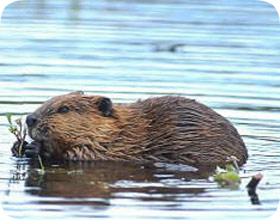 Beavers are usually classified as a pest species due to their habits of building dams. The most common complaints include the following:

For these reasons, many people wish to have this nuisance animal trapped and removed. Most beaver trapping methods are lethal, although there are some live traps available.


BEAVER BIOLOGY: The American Beaver, Castor canadensis, is the largest rodent in North America, and the second largest in the world. They can reach up to 45 inches long and 70 pounds. Beavers mate for life, and mating occurs in the winter. A litter of 1-4 young is born in May. The young are born with fur and open eyes, and are ready to swim within 24 hours. They reach independence in about two years and set out to find their own territory.

BEAVER BEHAVIOR: Beavers form family units of around eight members, and mark their territory with urine-marked mud puddles. They are primarily nocturnal, and gnaw down trees and twigs, and bring them back to the home den. They store twigs for feeding. They are good engineers, and build dams in streams to make a pond. They build a lodge within this pond, in which they live. They will also build canals in order to travel and transport wood. When in danger, they may slap their tails on the water as a warning signal to other beavers. They primarily eat bark and the soft wood under the bark, called cambium.

NUISANCE CONCERNS: The main problem is that they flood areas with their dams. This can cause a number of problems, such as timber loss, flooding of property, or flooding of roadways. Some people complain about tree destruction, but this is a minor problem compared to the flooding problems.

BEAVER DISEASES: No important diseases are commonly transmitted to people by this animal. But rare cases exist. Aside from rabies, a virus found in many wild mammals, beavers have been known to spread giardia, a protozoan parasite that causes gastrointestinal distress. Other mammals, including humans, can get giardia, otherwise known by the name of Beaver Fever. Giardia lives in any water and can be present in people even if symptoms of the disease do not manifest.

HOW DO I GET RID OF BEAVERS? Usually the only means is trapping and removal. One could also shoot the beaver, I suppose. When it comes to trapping, there are both lethal traps, such as connibear style body grip traps, and very large cage-type clamshell traps as seen below. Neither of these is really a do-it-yourself type of trap - the sets are complex and subtle. Experience matters when dealing with this large member of the rodent family. For more detailed information read my beaver trapping tips page to learn about common traps, sets, bait, etc.

CAN'T I JUST USE A REPELLENT? There's no such thing as an effective beaver repellent. Call a professional beaver trapper if you need nuisance beaver removal.

Read more on my how to get rid of beavers page. Some beaver trapping methods call for lethal control. To learn more, read my How To Kill a Beaver page.

About Beavers:
Phylum: Chordata
Subphylum: Vertebrata
Class: Mammalia
Order: Rodentia
Family: Castoridae
There are two species of beavers, which are found in the forests of North America, Europe, and Asia. They are the North American beaver and the European beaver.

Appearance
Beavers have transparent eyes that enable them to see while moving under water. The eyes are protected by a membrane so as not to be blinded by water currents and the rodents nose and ears are shut for protection as well. As is common in the rodent family, beavers have huge front teeth that serves several functions. The average weight of a healthy beaver is of between 30 and 60 pounds, while in extreme cases, some can weigh as much as a human. They reach an average length of 4 feet. The beaver has a tail that is thick, broad, hairless, and stiff; similar in shape to a paddle. This tail is an adaptation that enables the beaver to properly and efficiently steer itself in water, and to balance well when it is on land. It also is used to send a warning signal by slapping the water rapidly when there is danger in sight either from humans fishing or other predators. This signal can be felt miles away from its source and it serves to warn young beavers well ahead of time to dive for the lodges. Another adaptation for the beavers under water life is its large, webbed hind feet. Beavers usually have more than one shade of brown in their skin color, with an almost-black dark brown being the extreme case. They have thick coats that remain water proof, thanks to a scent that is secreted in their glands.

Habitat
Beavers are found in almost every part of the world except the extremely cold and the extremely hot regions. They are hard workers and are known for constructing dams on streams and rivers, within which they go on to build their dome-like homes. They also construct canals to transport heavy supplies across the water. Beaver homes are called lodges and are built from logs, branches, vegetation and mud. They are able to construct a lodge in 8 hours. Beavers are active all season long and in times of snow their ponds act as a form of protection. A typical beavers lodge contains two dens, one for drying off after entering the lodge via the underwater entrance, and a second, dryer den where the family lives and socializes.

Behavior
The large rodents move clumsily on land but are very graceful inside water, swimming with their large, webbed rear feet and their paddle-shaped tails that act like rudders. Beavers are able to swim at speeds of up to five miles (eight kilometers) an hour and they can conveniently stay underwater for 15 minutes without surfacing. Their ability to alter the landscape is remarkable and the dams they build play a major role in sustaining the ecosystem. Beavers are nocturnal but occasionally active during the day. They are monogamous creatures, living and mating in pairs that stay together sometimes for life. A colony of beavers usually contains 2 to 12 individuals - the adult breeding pair, the kits of the year, and kits from the previous year or years.

Diet
Beavers are herbivores, feeding on plants, bark, small twigs and trees - aspen, poplar, birch, maple, willow, cherry, cambium and alder. The North American beaver is particularly fond of water lilies. In the warm months however, beavers feed on berries and aquatic plants especially cat tails. They have large and sharp incisors, which are used to cut trees and peel bark while eating. The beavers front teeth grow throughout their lives, but are worn down by grinding them together and tree cutting.

Life Cycle
Beavers breed between January and March, and the female produces a litter of one to eight kits between April and June. The mother beaver nurses the kits until they are weaned at 10 to 12 weeks of age. Most kits remain with the adults until they are almost two years old after which they leave to find mates and begin new colonies. Thanks to their size, behavior, and habitat, beavers have few enemies. When on land, they are preyed upon by bears, coyotes, bobcats, cougars, and dogs. However, man remains the greatest enemy of these rodents because of their rich fur.