How to Kill Armadillos - Poison, Shoot

Need armadillo removal in your hometown? We service over 500 USA locations! Click here to hire us in your town and check prices - updated for year 2020.

I'm guessing that you're having a problem with armadillos *1. They are most likely digging up your yard, filling it with holes, throwing dirt everywhere. Maybe they're digging up your landscaping. Perhaps you've got a big hole, an armadillo burrow, next to your house or under your shed, and there's a giant mound of dirt there. Whatever the case, you want those pesky armadillos gone! You want to kill the armadillos! 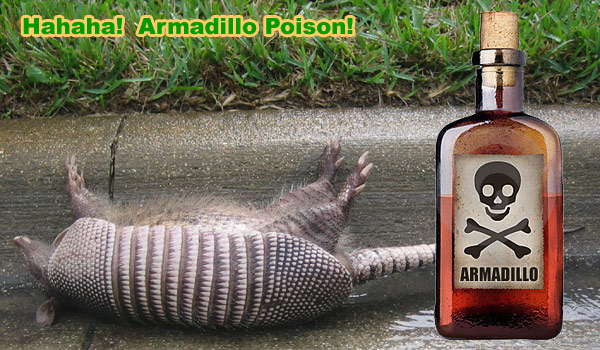 How do you you kill an armadillo? Well, you could try poison. You can go to your local department store and in the wildlife eradication aisle, there should be various selections of poison for armadillos. Just sprinkle it on your yard where the armadillos are feeding, or pour some down the hole, and it'll kill the armadillo no problem. *2 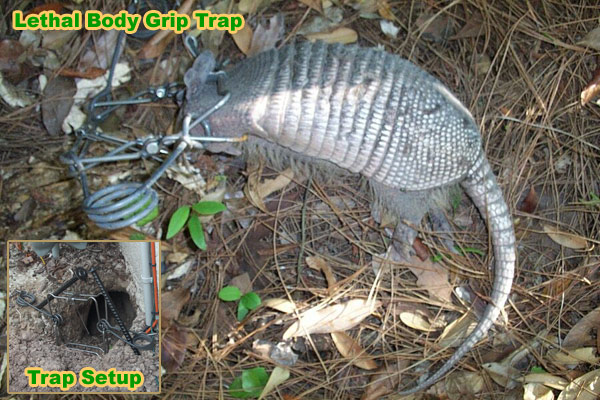 Or you can set a lethal body grip trap, such as a connibear 120. Find the armadillo burrow, and set the trap right over the hole, and then when this dumb brute walks into the trap, WHAM, it's dead. *3 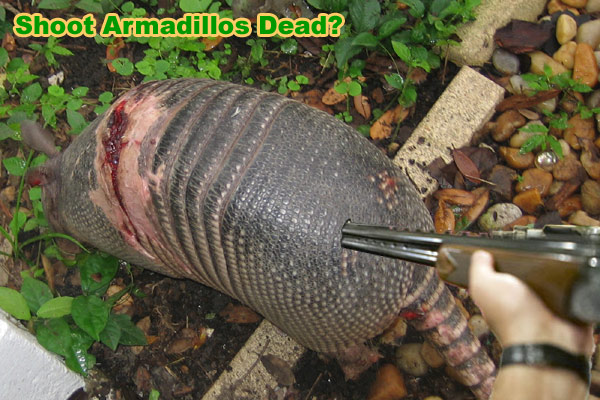 Or why not just get your trusty rifle or shotgun, and shoot the armadillo to death? That's one sure way to kill an armadillo. Heck, why are you even on this armadillo page if you've got a powerful gun handy-dandy locked and loaded at your side? You know what to do, just load 'er up, aim, and fire away! Armadillo problem solved! *4

Okay, if you haven't guessed, I'm kidding about these methods. It's true that if you really want to kill armadillos, you can try the above tactics, and they may work. I'm not disputing that. And if you really want to kill armadillos, there's no one stopping you. It's not against the law, as far as I know, although you might want to check your state's regulations. But I am here to tell you that if you merely have an armadillo problem that you want to solve, there's a far easier way to do it than by killing them. Killing them is hard, and it takes work, and it's potentially dangerous for you and other animals (those body grip traps as shown above are killers of everything, from dogs to cats).

All you've got to do is trap the armadillos in live cage traps, and then relocate them about five miles away. It's easy, way easier than trying to shoot them or set a lethal trap. If you want to learn more about the process, click this link about how to trap an armadillo. Basically, you just need to set a large sturdy cage trap on the armadillo's path, or even right over the burrow. Make sure it's flush with the ground and doesn't rattle. No bait needed. If you need help with trapping - and to be honest, experience does help a lot with trapping success - and want a professional to assist you, you can click on this map of Professional Wildlife Removal Companies and you'll find someone in your area.

*1 Unless you want to kill one to eat it. Some people do hunt and kill armadillos to eat them, which I advise against, because it has actually been documented that this is a way for humans to contract leprosy. See this letter about armadillo leprosy.

*2 I'm actually kidding here. There is no effective or registered armadillo poison out there. How the heck would you even get an armadillo to eat it? Armadillos eat ALL their food out of the ground, all live earthworms and grubs. They'll never eat anything dead, or anything on the surface of the ground. So even if you could find an armadillo poison, there'd be no way to administer it.

*3 These body grip traps are real, they are used by old-time fur trappers, and they do work. Yes, you can kill an armadillo with a lethal body death-grip trap. But these traps are for professionals only. They are difficult to set, and very dangerous. And they very frequently kill animals not intended. They are hair trigger. If an opossum, skunk, groundhog, or worse, a dog goes sniffing around the burrow and the trap - which is what these animals do - they're going to get snapped to death or to a gruesome injury. And actually, these traps are not meant for armadillos, with their bony armor. I don't think this is a good choice at all.

*4 It would actually be fairly hard to shoot an armadillo to death. It's not that their armor would protect them. A strong enough gun would penetrate through the plates. It's that armadillos sleep 20 hours a day. They only come around for a few hours at night, and then they move around quickly, rooting in the soil. It might be hard to find the animal and shoot it in the dark. And if you live in a neighborhood, it's likely illegal for you to discharge a firearm there anyway.

So there you go, I do believe that trapping in cage traps is by far the easiest option for armadillo control. It's true that once in a trap, you could kill it then, but I've worked with these animals for many years, and I really do think they're great creatures. I don't care if people kill squirrels, for example, but armadillos are neat. They can live a long time, and I don't think they should be killed. But it's your call. If you want to learn more about armadillo behavior and biology, go to my main armadillo removal page.

Read about: What Diseases Do Armadillos Carry?

One of the biggest problems when you are trying to kill a pest animal comes when that pest animal is one of the creatures with the heaviest armor found in the natural world. The armadillo is the small animal version of a tank, with heavy armor plates forming a carapace around the small and relatively gentle creature that is protected within the armor. The reality is that if you are trying to kill the armadillo in the yard, you will probably need to catch it first, and then kill it.

Can You Shoot The Armadillo?

There are several factors to consider when looking at this, as the thick armor of armadillos has been known to deflect some weaker shots, and even send the bullet ricocheting in another direction. You will also need to check to see if the local laws allow you to discharge a firearm, as in most cases this will only be an option for those living in rural areas. The third challenge if you do have a gun powerful enough is that you will usually need to shoot the animal in the semi-dark, as armadillos are only really active around dusk and into the night.

Trapping an armadillo is quite straightforward, as all you will need is cage trap, which can be placed against the wall near the hole of the animal, and then a small amount of fencing material or wood to guide the animal to the trap. You can either bait the trap with worms or maggots held in a small net, or you can leave the trap without bait, and usually the armadillo is caught quite quickly.

Once you have caught the armadillo, then it is still quite difficult to kill, and one way is for a veterinarian to deliver a lethal injection that will kill the animal. Alternatively, you can place the trap with the armadillo inside within an airtight chamber, and then fill the chamber with Carbon Monoxide, which will quickly put the armadillo to sleep.

Better Ways To Get Rid Of An Armadillo

The problem with dealing with armadillos is that they are very difficult to kill, which is why many people actually prefer to relocate the animals instead. Check local regulations, and where possible you should look to release the animal at least ten to twenty miles away from your home.

Should I ever poison an Armadillo?

Poison is one of the biggest problems that faces those who deal with problem animals on a regular basis, as it has become so prevalent that many people choose to ignore the harm that it can cause. However, when it comes to trying to solve an armadillo problem, poison is purely a hazard, as it is completely ineffective when it comes to dealing with an armadillo. If you are serious about getting rid of a pest animal, then poison is simply not the route to go down.

The Key Reason Poison Does Not Work

In order for a poison to work, then it must be something that has some attraction that will cause the animal to eat it. The armadillo is a species that falls into the insectivore category, meaning that they will only eat live insects, worms, grubs and maggots, so a static piece of poison really doesn't have any attractions for the creature. Indeed, it is very difficult to get the armadillo to consume any poison at all.

Along with the fact that the armadillo will not consume the poison, another issue to bear in mind is that one of the risks of laying down poison is that someone or something else will find it and consume it accidentally. Whether you have young children that play in your yard or garden, or there are domestic animals in your neighborhood, the risk of killing other animals is simply not worth the risk.

Unforeseen Consequences Of Poison Use

While the poison may not kill the intended target, it can also kill other wild animals, and in some cases these animals will then be consumed by carrion animals, which can lead to a build up of poison in the food chain. Another issue is that you have no way of determining where the animal will die, so if it does find a corner behind a shed or in a hedge in your garden, then it may well attract other animals with the scent of the carcass.

The real solution for an armadillo infestation is trapping and removing the problem animal, and in reality this is not as difficult or as time consuming as many people would think. You can also hire a professional to carry out the work for you too, who may also be able to help with filling holes if the armadillo has been burrowing.

Go back to the Armadillo Removal page.